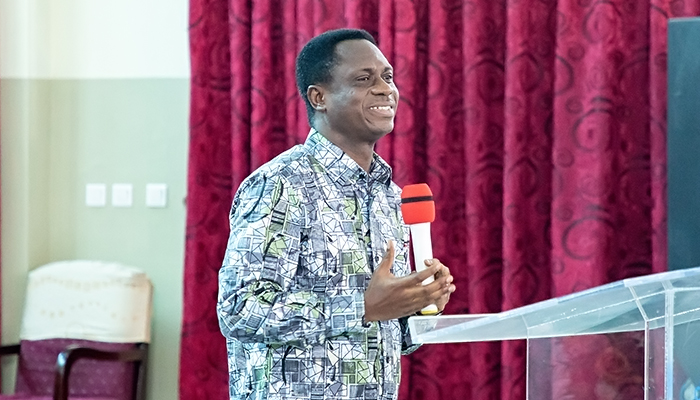 The Chairman of The Church of Pentecost, Apostle Eric Kwabena Nyamekye, has met with ministers and their wives in the eastern part of the Greater Accra Region.

The annual meeting, which took place at the auditorium of the Burma Camp Worship Centre on Wednesday, September 11, 2019, was attended by ministers from La, Madina, Teshie-Nungua, Tema, Ashaiman and Haatso Areas.

The meeting was meant to educate the ministers on the Church’s policies and the new vision (Vision 2023), promote fellowship among them, wait on the Lord for strength from on high, and officially welcome those who have newly been transferred into the region.

Addressing the ministers, the Chairman entreated them to work hard to justify their transfer to the region, which is the administrative centre of the Church. He indicated that, being a minister in the national capital, which is a cosmopolitan area, involves a lot of dynamics, which the ministers should know in order to impact positively on their ministry.

He identified three Ps that ministers in the capital city should be aware of to guide them in their ministry. These, he said, are: pollution, pluralism and polarisation.

He explained that, the city is polluted with all sorts of ideas because it is made up of people with diverse orientations. Having knowledge of this, he said, would help them to decipher good ideas from bad ones in their quest to maintaining their spiritual sanctity.

Touching on pluralism, the Chairman noted that people in cosmopolitan societies believe in what seemed good to them, in that relativism has become the order of the day. He asked the ministers to be tolerant to accommodate diverse views but hold on to the true Pentecostal heritage and the Church’s doctrines by studying the word of God and reading widely to be abreast with time.

On polarisation, he explained that, people in the cities were of sharp opposing views since there are many things like political inclinations that divide them. He, therefore, advised the ministers to be mindful of their pronouncements on the pulpit.

Apostle Nyamekye admonished them to remain focused on the ministry and not meddle in things that could easily distract them to avoid becoming spiritually vulnerable.

“Work hard and leave the rest to God. Here [in Accra] there is a lot of vulnerability. There are so many elements of destructions and if you are not careful you will become spiritually vulnerable.

“I don’t want us to base our hope on the flesh. My prayer is that we will come back to our spirituality. Let God be your supplier. Build your spiritual life, because we want spiritual people, not dynamic carnal people. “The fast life in Accra can cause you to be a backslider. Try as much as possible to keep to working in your district for the members to benefit from your ministry,” he said.

Taking the ministers and their wives through the Vision 2023 Document, the Chairman charged them to teach and equip the members with godly values and principles to go out and possess the nation in all spheres of endeavours.

The Chairman entreated all ministers of the Church and their wives to take a personal interest and lead roles in the ministries activities so as to encourage the members to involve themselves in the programmes of the ministries, saying, “People will always model what you do.”

To ensure the effective implementation of the Environmental Care Campaign, the General Secretary advised ministers to engage opinion leaders in their districts and areas to champion the campaign so that they would carry the community people along to participate in it..

There were presentations on the Home and Urban Missions (HUM) and Persons With Disabilities (PWDs) by the National Coordinators, Pastor Emmanuel Agyei Kwaffo and Probationary Overseer Alexander Nyame, respectively.