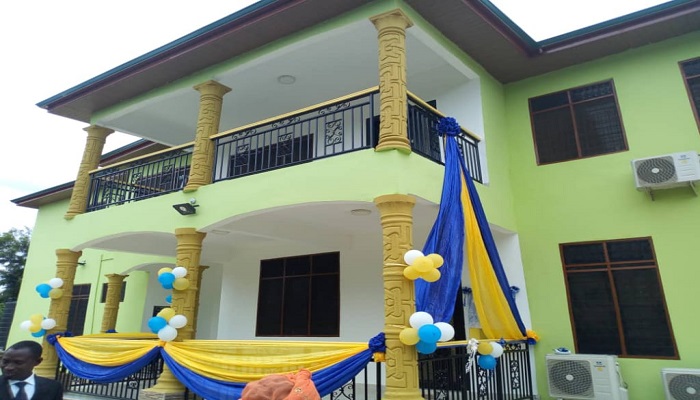 The Chairman of The Church of Pentecost, Apostle Eric Kwabena Nyamekye, has dedicated newly built one-storey Hohoe Area Mission House constructed at the cost of GH¢ 441, 027.92.

The manse was dedicated on August 14, 2019, as part of the Chairman’s familiarisation tour of the Volta and Oti Regions. He was assisted by the Hohoe Area Head and Executive Council Member, Apostle Yaw Adjei-Kwarteng, and the pastorate in the Area.

The mission house project began in 2013 during the tenure of Apostle David Tettey Tekper, the then Area Head. The project received a major boost when Apostle Yaw Adjei-Kwarteng took in 2015, as he injected capital into it till completion.

Addressing the church at the Kpoeta Central auditorium, popularly called the ‘Cathedral’ the Chairman said the church is about one another just as the parts of the human body are interdependent.

Speaking on the topic, “The Gathering of the Saints” based on Hebrews 3:12 and 10:23-32, he counselled Christians to be in the presence of God at all times.

According to him, whenever the saints of the Lord gather, the blood of Jesus that speaks better things than that of Abel speaks for them and for that matter they should never forsake the coming together of the saints since it is one of the means by which God’s graces are manifested.

Continuing, the Chairman said that people go to church to meet God and to have fellowship with Him.

Apostle Eric Nyamekye seized the occasion to espouse the Vision 2023 of the Church and charged the gathering to embrace it.

The Chairman, as part of his visit, also met with all the ministers and wives of Nkwanta, Kete-Krachi and Hohoe Areas at Hohoe. He advised ministers to see the call of God as a charge to keep the holy people and holy things of God well since God himself is holy.