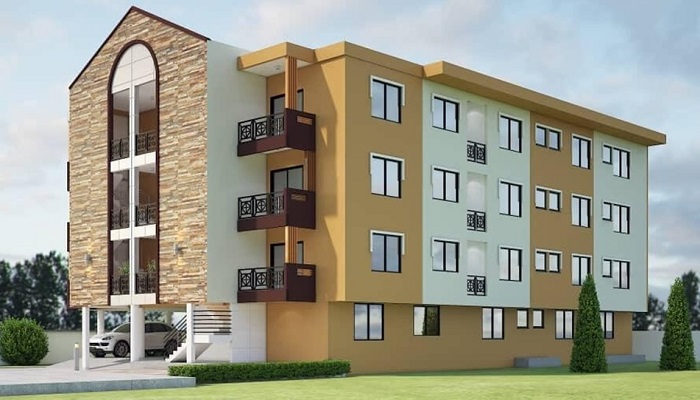 The Chairman of The Church of Pentecost, Apostle Eric Kwabena Nyamekye has dedicated the newly-constructed 7-unit apartment Mission House Complex at Dansoman Sahara Down in Accra to provide accommodation for ministers in the Dansoman Area.

The project, which took only a year to complete, was mainly financed through grants from the Head Office, Dansoman Area and the beneficiary districts.

Speaking at the ceremony, Apostle Nyamekye congratulated the leadership and the church members for their financial contribution, integrity and commitment towards the completion of the project within 12 months, adding that the grace of God played the most important factor.

He also commended the Dansoman Area Head, Apostle Onyinah Gyamfi and the Area Executive Committee for the visionary leadership and remarkable commitment to the project.

Apostle Eric Nyamekye urged all leaders in the country, especially public servants, to take a cue from the church’s sense of integrity and moral character when undertaking any project.

Encouraging the congregation for their continuous support to the church, the General Secretary, Apostle Alexander Nana Yaw Kumi-Larbi underscored the significance of tithing to the financial strength and infrastructural growth of the Church.

He explained that grants that the local churches receive from the Head Office and the Administrative Areas of the church are all tithes paid to the church by members and therefore encouraged them to continue to tithe faithfully so that the church would be financially equipped to undertake such building projects.

Delivering a sermon titled “Visionary Leadership Not Money” from 2 Kings 4:10-11, the Kasoa Area Head, Apostle Ekow Badu Wood, explained that the servant of God saved the child of the Shunammite woman and honoured her because of her kind gesture towards him and his servant. He, therefore, urged church members to also replicate the good deeds of the Shunammite woman.

The Kasoa Area Head further noted that the church has the vision of promoting spiritual development and moral integrity in Ghana and thus translates the virtues of the Kingdom of God in the discharge of all projects. Apostle Wood, therefore, advised church members to also imbibe godly virtues in their children.

On his part, the Dansoman Area Head, Apostle Onyinah Gyamfi explained that the construction of the Mission House Complex formed part of efforts to provide permanent places of residence for ministers of the 5 districts in the area that had no Mission House and were, therefore, residing in rented apartments. They are PIWC-Dansoman, Twereboa, Sahara, Bethel and Chemunaa.

Apostle Onyinah Gyamfi, however, noted that there was the need to expand the number of apartments to 7 to cater for the additional districts that are soon to be created in the area in the foreseeable future.

Giving a brief historical background of the magnificent building, the Dansoman Area said “the land on which the Mission House Complex is built was acquired by Sahara Central Assembly (then Bethel Assembly) in 1994, under the visionary leadership of Elder Samuel Somuah who was then Presiding Elder.

The ceremony was attended by the Deputy Greater-Accra Regional Minister, Hon. Deaconess Elizabeth Sackey who cut the sod to open the building, as well as some Chiefs, Heads of corporate institutions, Area Heads and the Clergy from other churches.