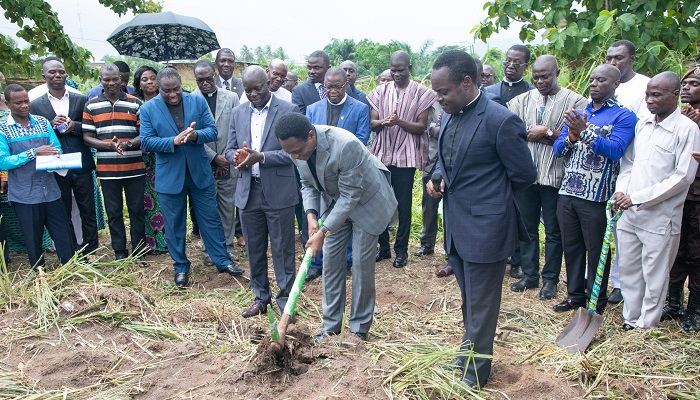 The Chairman of The Church of Pentecost, Apostle Eric Nyamekye, on Sunday, July 21, 2019, cut the sod for work to begin on the construction of a new facility for the Nsawam Medium Security Prison.

The building project, which is being funded by the Church, is in line with efforts by the Church to decongest prison facilities in the country.

The event was also witnessed by a host of ministers of The Church of Pentecost including Apostle Samuel Osei Asante and David Tekper, both Executive Council Members of the Church. Also present were the Director-General of the Ghana Prisons Service, Mr. Patrick Darko Missah, Apostle James Tetteh (Assistant Director of Prisons), and other officials of the prisons service.

Speaking at the ceremony, Mr. Patrick Darko Missah expressed gratitude to the Chairman and the Church for their continuous support to the prisons service. He said that the construction of the facility is an answer to the age-long challenge of overcrowding in the Nsawam Medium Security Prison.

He said the new facility would, therefore, help to deal with the issue of congestion in the prison facility and also increase the productivity of the prisons workforce.

The Estate Manager at the Church’s Headquarters, Pastor James Orhin Agyin, who was also present at the event, said that the project is expected to be completed by January 28, 2020, after which it would be dedicated and officially handed over to the Ghana Prisons Service.

He revealed that, when completed, the Nsawam Prison Camp facility would be able to accommodate 300 prison inmates. It would also have a training workshop, an administration block, a church building and a recreational facility.

Meanwhile, works on the ultra-modern holding facility for the Ghana Prisons Service at Ejura Nkwanta in the Ashanti Region, which is also being funded by the Church, is still in progress. The project is expected to be completed by the end of this year.