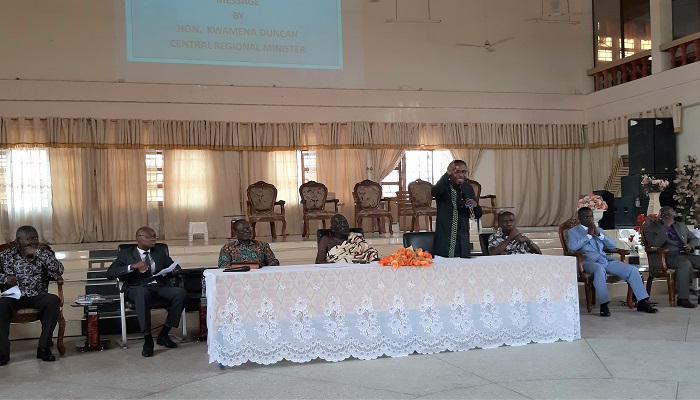 The Cape Coast Area of The Church of Pentecost has organised an environmental forum for all stakeholders in the Cape Coast municipality and environs ahead of the church’s Environmental Care Campaign from 24th to 29th February 2020.

The event took place on 20th February 2020 in the auditorium of Adisadel Assembly.

Speaking at the event, the Area Head, Apostle Samuel Yaw Antwi, said that The Church of Pentecost, through her 5-year strategic vision dubbed “Vision 2023: Possessing the Nations,” is aiming to influence every sphere of society with Kingdom principles, values and lifestyles.

He indicated that the Environmental Care Campaign is one aspect of the church’s “Possessing the Nations” agenda. Hence, in line with the campaign, the Area has identifiedenvironmental degradation and unsanitary conditions, such as pollution of beaches and indiscriminate dumping of refuse, as some of the key environmental challenges facing the region that ought to be tackled.

According to him, the focus of the church for the upcoming campaign is to advocate for a positive change in Ghanaians’ attitude towards environment. As a result, public education campaigns on environmental cleanliness will be carried out in schools, media, marketplaces, and lorry stations, among others.

He, therefore, called on all stakeholders to contribute towards finding a lasting solution to the environmental problem in the region and the nation at large since it is the responsibility of all and sundry, particularly Christians, to protect God’s creation and not to destroy it.

The Chairman for the Forum, the Oguaa Manhene Osaberima Kwasi Atta II, was full of praise and commended the Area Head and The Church of Pentecost for such a great and wonderful initiative.

He said that most diseases in the society today can be attributed to the filth that has engulfed the various communities.

He, therefore, appealed to the citizenry to uphold cleanliness as it is next to godliness. He also pledged the full support of the Oguaa Traditional Council towards this year’s Environmental Care Campaign and also warned that people who pollute the environment will be dealt with by the traditional council in the days to come.

The Central Regional Minister, Honorable Kwamina Duncan, who was also present at the event, commended the church for the initiative and expressed the readiness of his outfit to partner the church in ensuring that the campaign yields the desired results.

“We are all worried about the unsanitary conditions in our society. The environment as created by God, was meant to give us pleasure but that is not what we see now in our communities. We must all contribute to ensuring that we have a clean environment and for that reason, the Regional Coordinating Council is ever ready to partner the church in her quest to promote environmental cleanliness in the nation,” he said.

Hon. Duncan also proposed that an inter-agency coordinating team should be set up among all the stakeholders to promote and maintain environmental cleanliness even after the Environmental Care Campaign. He concluded his submission by charging Ghanaians to change their negative attitudes toward the environment and to ensure that Cape Coast becomes the cleanest city in Ghana.

Others who were present at the Environmental Campaign Forum were the Cape Coast Area pastorate and their spouses as well as the Mayor of Cape Coast.

All participants were given the opportunity to contribute to the discussions.