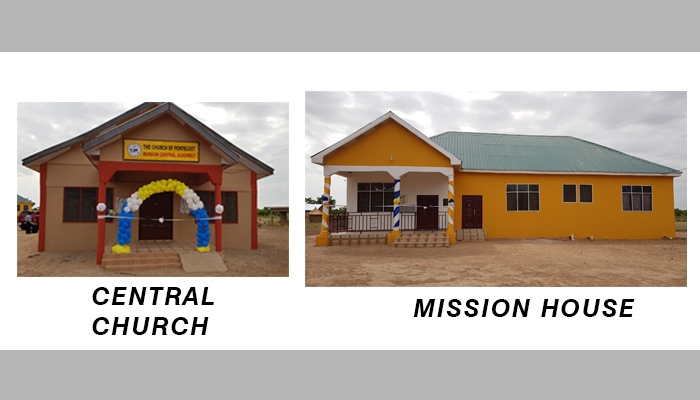 The Yendi Area Head of The Church of Pentecost, Apostle William Kojo Edzorhoho, on Saturday, May 25, 2019, dedicated the Bunbon District Mission House and Central Church auditorium in the Yendi Area.

The district was created out of the Yendi Area in 2018, with Overseer James McKeown K. Safo as the pioneer minister.

Speaking at the service on the topic, “Get Involve” with 2 Kings 6:1-7 as his main text, Overseer Isaac Berko exhorted the members to get involved in the activities of the Church and communal work in order to become agents of transformation. “As we see this beautiful edifice, some people got involved. Nothing beautiful comes to reality without involvement,” he said.

The Central Assembly, on the other hand, was established on April 11, 2001, through the efforts of one Deaconess Grace Danah. She started the Church in her dressmaking shop and later moved it to a classroom to accommodate the growing membership.

Deaconess Faustina Wumbei later took over from Deaconess Grace Danah as Presiding Leader. Deaconess Stella Ataa purchased eight plots of land for the Church. In 2014, an amount of GH¢20,000.00 being Missions Grant from the Headquarters was released to the district to start the central church project.

Apostle William Kojo Edzorhoho, in his remarks, commended the District Minister, officers and the members for the good work done.