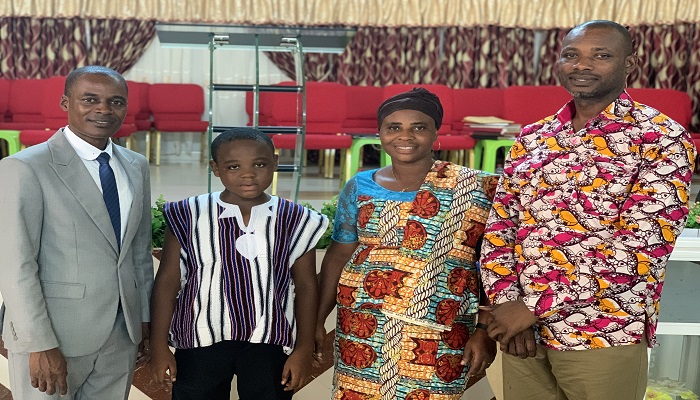 Ishmael Adjei is an 11-year-old Primary Six pupil of Triumph Royal International located in the Tarkwa Municipality of the Western Region. Ishmael and his parents, Mr. Ernest Adjei Cobbinah and Mrs. Esther Sarfo fellowship at J. W. Sackey Worship Centre in the Tarkwa Area of The Church of Pentecost.

According to Mr Cobbinah, he had a call from his son’s school on Tuesday, September 17, 2019, that Ishmael was ill and had been taken to a clinic at Tarkwa. He rushed to the clinic only to be told that Ismael not could see.

Narrating how the incident happened, Ismael said that he went to buy food during break time and when he was returning to the school, he overheard a chat behind him that, “This is the one we want.” According to Ishmael, he turned to see the one who said that only to notice a fearful being with three heads behind him. He screamed and collapsed. When he recovered, he could not see again.

When he was discharged, his parents took him to their District Minister, Pastor Abraham Nana Bamfo Oppong, who prayed for him. During the district’s weeklong programme dubbed “Grace Convention,” the church prayed and the Lord intervened.

Narrating the story, Pastor Nana Bamfo Oppong said that during prayers, he heard a voice from above that “I have healed him.” Quickly, he stopped the prayers to test whether Ishmael could actually see. He said Ishmael told him that he could see but something like spiderweb had blurred his sight. He said he decreed the words of the voice he had heard on Ishmael. The boy regained his sight instantly after a flashlight spark on his eyes.

Pastor Nana Bamfo Oppong gave glory to the Lord for the miracle. When the mother saw his son walk with the Pastor, she thought it was a dream. The miracle has increased their faith in God.