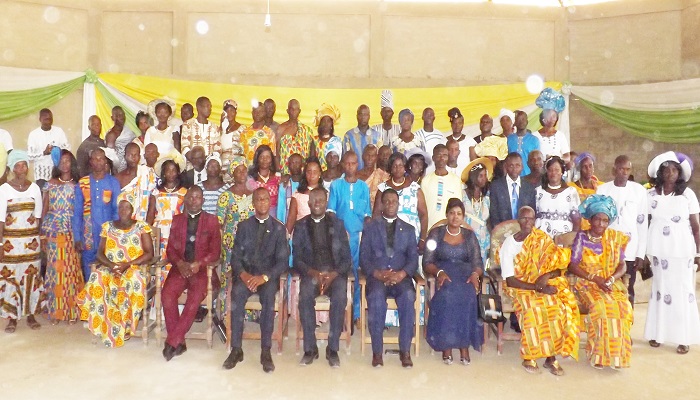 The Central Assembly auditorium of the newly created Bimpong Egya District in Assin Foso Area of The Church of Pentecost was filled to capacity when the district organised its maiden mass wedding ceremony for 26 couples.

The programme, which took place on Saturday, December 28, 2019, was officiated by the District Minister, Pastor Abraham Gyabaah.

Although they have all undergone the customary marriage rites many years ago, they were elated to dedicate their marriages unto the Lord.

Preaching the sermon on the theme, “Maintain the Glory of God in Your Marriage” based on Ephesians 5:1-2, 25-28, Pastor Vincent Ephraim Amegah of Twifo Praso District said that marriage is a blessing and glory from God, because He Himself instituted it in the Garden of Eden. He continued that, righteous people understand marriage and marry to the end no matter the challenges they might face in life.

The Bimpong Egya District Minister, Pastor Abraham Gyabaah, on his part, advised couples who have not dedicated their marriages to God and prospective couples to consider taking part in mass weddings to cut down cost.

Present at the programme was the Ghana Education Service (GES) Circuit Supervisor for Bimpong Egya, Mr. Daniel Agyapong Budu, among other dignitaries.