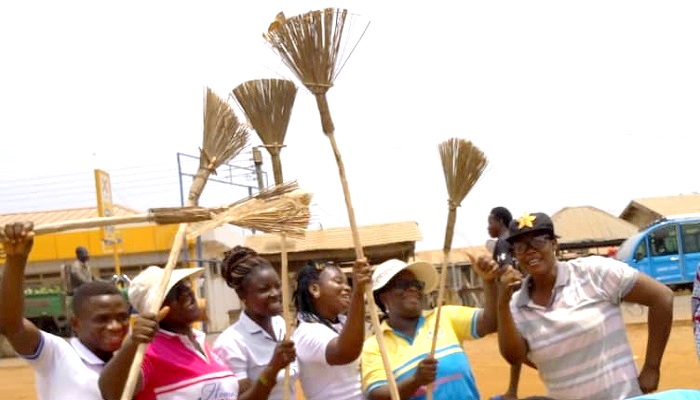 The Bimbilla and Juo-Nadundo Districts in the Yendi Area of The Church of Pentecost held a joint ceremony on Saturday, March 16, 2019, to officially launch the Environmental Care Campaign.

The event, which was under the theme: “My Environment, My Responsibility,” had the Municipal Chief Executive (MCE) for Nanumba North, Hon. Abdulai Yacoub, as the Special Guest of Honour.

Also present were the Bimbilla Branch Manager for Zoomlion Group of Companies and the Assistant Headmaster for Bimbilla Senior High School.

At the launch, the various speakers took turns to reiterate the need for us to take good care of the environment. They noted that caring for the environment is not just about clearing trash but also maintaining water bodies, forest reserves, natural minerals, etc.

The event was followed by a massive clean-up campaign in Bimbilla Township. The 200 members of Bimbilla and Juo-Nadundo districts who took part in the exercise were joined by 100 personnel of Zoomlion Ghana Limited to clean-up the principal streets of Bimbilla. It was heartwarming to see a section of the Ghana Police Service and nurses also take part in the exercise.

The Environmental Care Campaign is a flagship social responsibility initiative by The Church of Pentecost in conjunction with Zoomlion Company Limited aimed at protecting and preserving the environment.

The initiative has been undertaken at various levels of the church structure through both advocacy (education) and social action (clean-up exercises). Other Districts in the Yendi Area including Saboba, Tatale, Gnani have also followed suit in launching the Environmental Care Campaign.