Beware Of The Teachings Of Demons – Chairman

Home - News - Beware Of The Teachings Of Demons – Chairman 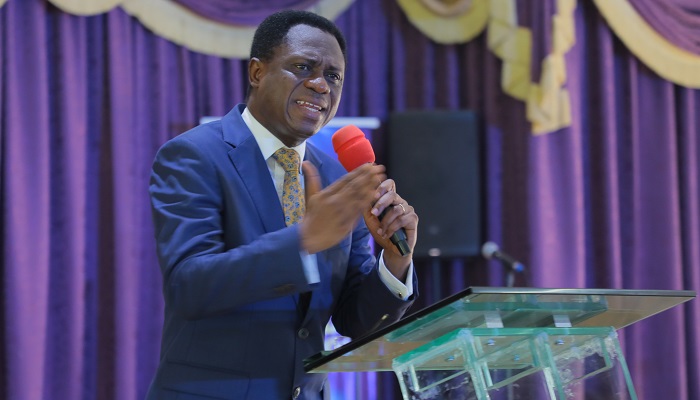 Beware Of The Teachings Of Demons – Chairman

The Chairman of The Church of Pentecost, Apostle Eric Nyamekye, has advised Christians to be wary of deceptive philosophies that are based on human traditions and the principles of the world.

According to the Chairman, such philosophies are propounded and taught by “hypocritical liars” whose consciences have been captivated by demons.

Apostle Eric Nyamekye said this on Sunday, October 7, 2019, when he fellowshipped with members of the Pentecost International Worship Centre, Cape Coast (PIWC-Cape Coast) to climax his weeklong visit to the Central Region.

Speaking on the topic: “The Teachings of Demons,” the Chairman explained that Lucifer was an anointed cherub (angel) who was specially created by God. (Ezekiel 28:12-17)

“He was a model of perfection, full of wisdom and perfect beauty. However, his heart became proud on account of his beauty and he corrupted his wisdom because of his splendour,” he said.

He explained that as a result of this, Lucifer, who is now known as “the dragon, ancient serpent, the devil, or Satan”, was expelled from heaven onto the earth where he is bent on destroying everything God has created.

Reading John 8:44 and Revelations 20:1-3 and 7-10, the Chairman described the devil as a liar and a master of deception. He said that the devil is an unrepentant deceiver who is able to present lies as wisdom.

“The devil is a liar and the father of lies. When he lies, he speaks his native language. However, his lies are shrouded in his corrupted wisdom. Deception is an effective combination of lies and wisdom. Satan is, therefore, able to deceive by presenting his lies as wisdom to his unsuspecting hearers. It takes the Spirit of God to see through or discern his deception,” he said.

He said that the devil is in the business of deceiving the nations and he does this through false teachings that are based on human and philosophical ideals rather than Jesus Christ. (1 Timothy 4:2)

“The teachings of the devil spread like gangrene (cancer). These teachings are taught by people whom the devil has taken captive to serve his purpose on earth,” he said.

He, therefore, advised Christians not to conform to contemporary worldviews and ideals so that they are not misled to abandon the faith and follow deceiving spirits. (Romans 12:2, 1 Timothy 4:1)

He said that the devil deceives through false teachings because he seeks to control the minds of people and in so doing take over the nations.

“Every born again Christian is in a battle with the enemy who is the devil. This battle is a battle over nations, and the battlefield is the mind. The devil is targeting the mind because that is where transformation begins. So we must fill our minds with the word of God or else the devil will fill it with false teachings,” he said.

Apostle Eric Nyamekye, therefore, encouraged Christians to be devoted to the daily reading of the word of God, emphasizing that “they not just idle words for you – they are your life.” (Deuteronomy 32:45-47)

He added that it is only when they take pains to read the Bible that they would be able to guard themselves against the false teachings of the devil. (Matthew 16:12)

The Chairman also challenged Christians to nullify the false teachings of the devil by teaching and preaching the truth of the gospel to unbelievers and making known God’s manifold wisdom to known through their words and deeds. He, however, advised Christians to confront or correct false teachings or teachers in a gentle and not in a quarrelsome manner. (1 Timothy 2:2-26)

Apostle Eric Nyamekye also encouraged Christians, particularly members of the church, to build Christian homes that reflect the love and nature of Christ. “The family is the basic unit of society. So to possess the nations we must first possess the home,” he advised.

He also said that, as Classical Pentecostals, members of the church should continue to yearn for the infilling of the Holy Spirit, and uphold holiness, godliness and simplicity in all things.