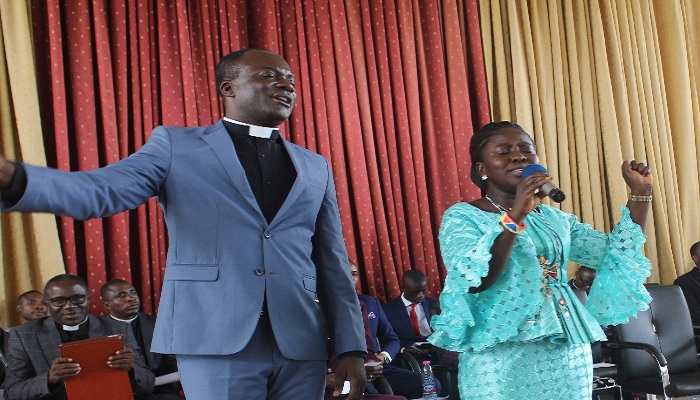 The Berekum Area of The Church of Pentecost has organised a special service to officially welcome their new Area Head, Apostle Samuel Berko and his family.

The service, which took place on Sunday, September 15, 2019, was officiated by Apostle Mark Obeng Andoh, Area Head of Sunyani and Chairman of the Regional Coordinating Committee of Bono, Bono East and Ahafo regions.

Apostle Andoh, who is an Executive Council Member of the Church, preaching the sermon on the topic, “Failing to recognize the time of your visitation” (Luke 19:41-44), said God always visits people but unfortunately some people do not recognize it. Such people, he said, end up complaining of not experiencing God’s hand in their lives.

He explained that Sodom and Gomorrah, as well as Lot’s wife, had a terrible end because they failed to recognize God’s visitation. “Angel Gabriel also became angry with Zechariah and caused his deafness because Zechariah questioned the miraculous visitation of the Lord,” he added.

Contextualizing his message, the Apostle Andoh revealed that God has brought Apostle Berko and his family to Berekum Area on a special assignment which, he believes, is God’s gracious and miraculous visitation to the Area.

“I am confident that God has endowed Apostle Berko with good things and those things are going to be brought to bear in His time,” he stressed.

Apostle Mark Obeng Andoh finally encouraged the congregation to take prayer seriously since it is an active tool that can bring their dreams, visions and expectations into a reality.

He encouraged  Apostle Berko and his family to discharge their duties with diligence, for the Lord is with them.

In attendance were ministers and their wives of the Area, traditional leaders, delegations from sister churches, among others.