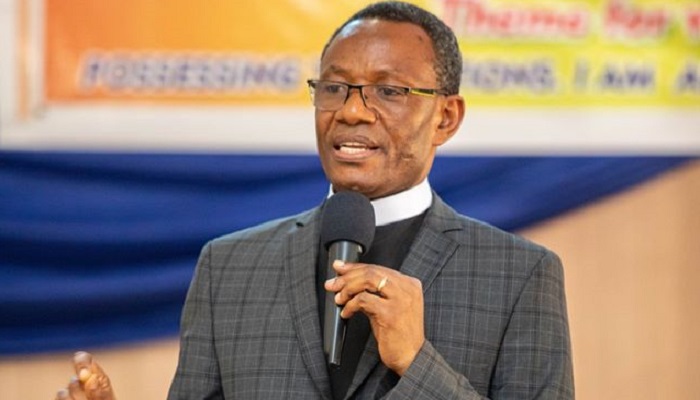 The General Secretary of The Church of Pentecost, Apostle Alexander Nana Yaw Kumi-Larbi has urged the Ghanaian citizenry, particularly Christians, to be patriotic citizens and seek the development and prosperity of the nation.

Apostle Kumi-Larbi issued this rallying call when he addressed Management and Staff of Tobinco Group of Companies (TGC) at the Group’s 2019 Thanksgiving service held in Accra on December 23, 2019.

Exhorting the gathering on the topic “Patriotism And National Development; The Role Of The Christian,” the General Secretary said that, as part of celebrating the goodness of the Lord in the Christmas season, Christians should take the opportunity to take stock of their lives as followers of Christ and citizens of the nation.

He said that it is important to reflect and make the necessary resolutions and adjustments so as to merit the blessings of God in the coming year and beyond.

In his sermon, Apostle Kumi-Larbi expressed concern for the alarming rate of corruption and indiscipline in the country although over 71 per cent of its citizens profess to be Christians.

He, however, noted that the afore-mentioned challenges could be easily resolved if citizens applied the virtues in the Bible.

Reading Luke 7:1-10 and Philippians 2:1-4, the General Secretary referred to the glowing testimony that was given about the Centurion by the Jewish Elders when he solicited the assistance of Jesus. He explained that, despite the obvious hindrances, the Centurion was granted his wish because of his love for the nation and his support for the work of God by constructing a synagogue for the Jewish people.

He said that, just like the Centurion, citizens should demonstrate their love and loyalty to the nation by always seeking the collective good of society and not their parochial interest.

“The National Anthem and Pledge of Ghana are an oath of allegiance to the nation. It embodies a solemn promise and commitment by all citizens, irrespective of their stature or class, to defend, uphold and be loyal to the nation and all that pertains to its well-being.

“In all honesty, this country would not see any positive transformation and development if citizens do not put others above themselves regardless of who or which political party is in power,” he said.

Apostle Kumi-Larbi also called on Christians to be law-abiding and submit to authority at all times. He said that it is the Lord who appoints those in authority, therefore every believer or follower of Christ is under obligation to honour governing authorities and submit to their rulership.

“As far as a Christian’s responsibility towards the government is concerned, we know from Romans 13:1-7 and 1 Peter 2:13-17 that we are to submit to the governing authorities and to honour them, even when they are not honourable because it is ultimately God who has placed them in authority over us.

“So, as Christians, we are under obligation to God to be model citizens, subject to the governing authorities over us by obeying laws, paying taxes, etc. However, our foremost responsibility is to be obedient to God,” he stated.

The General Secretary also reminded Christians of their responsibility in 1 Timothy 2:1-4 to offer prayers of supplication and intercession on behalf of those in authority. He bemoaned the fact that the country seems to be sharply divided along partisan political lines at all levels even amongst the clergy who ought to be the prophetic voice of the nation.

“The country is so divided that it is difficult for a person whose favoured political party is not in power (government) to pray for the prosperity of the nation. But, as a Christian, it behoves that you lift holy hands to intercede for the nation and those in authority regardless of who is in power,” he said.

He advised the citizenry to eschew bribery, embezzlement, fraud, favouritism, extortion, illegal contribution, nepotism, cronyism, conflict of interest, abuse of discretion, payment of “facilitation fees” and other practices that impede the development of the nation.

Apostle Alexander Nana Yaw Kumi-Larbi ended his sermon by challenging employees to be diligent in their work and always bear in mind that they are ultimately accountable to God and not just their human authorities. (Colossians 3:23,24, Romans 13:1)

“At the end of every month when we receive our salaries as workers, we must ask ourselves the question: have I worked for this money or I have wasted time on trivialities? What change have I brought to the workplace? And what value about Christ have I projected? Have I projected Christ as Lord in my workplace?” he said.

The TGC thanksgiving service is an annual event organized by Tobinco Group of Companies where the Management and Staff of the various subsidiaries of the Group come together to thank God for His faithfulness during the year. As part of the event, special awards are presented to outstanding employees at the subsidiary level.