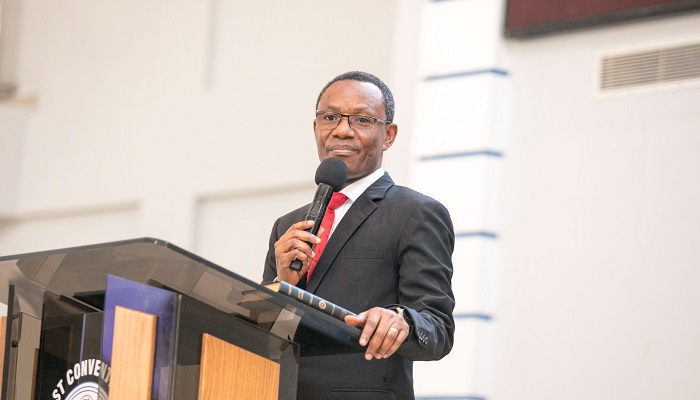 The General Secretary of The Church of Pentecost, Apostle Alexander Nana Yaw Kumi-Larbi, has advised newly-called ministers of the Church to aspire to be good and faithful servants of God in ministry.

Apostle Kumi-Larbi gave this advice when he delivered a sermon on the topic “Being A Good And Faithful Minister” on Friday, August 2, 2019, at the recently-held Commissioning Service and Graduation Ceremony of the Pentecost Theological Seminary (PTS) at the Pentecost Convention Centre (PCC), Gomoa Fetteh.

Using the Parable of the Talent in Matthew 25 as his key text, the General Secretary emphasized that no one person is better or more important than another, although some individuals have greater natural abilities.

He explained that this was the reason why the first two servants who were productive with the talents they were given both received equal commendation from the Master.

“With God’s gifts, it is not about how much talent one has, but how one uses it. In other words, it is not how many gifts that God gives to a person, it is what one does with them that counts,” he said.

Apostle Kumi-Larbi noted that, in the same way, God has given all human beings, both believers and unbelievers, various talents based on their abilities. These talents, he noted, can be sharpened or enhanced through learning to become skills.

He, however, explained that, in addition to the talents that God has deposited in human beings, persons who have accepted Jesus Christ as Lord and Saviour receive spiritual gifts to be used for the advancement of the Kingdom of Christ on earth.

Reading from 1 Peter 4:10, the General Secretary established that believers do not own these talents and gifts they possess. This is because, just like the servants in the Parable of the Talent, they are only stewards of God’s manifold graces and would be required to account for what has been entrusted to them.

Touching on the faithfulness of the minister, Apostle Kumi-Larbi explained that being faithful to God means “believing that God is who He says He is and continuing in that belief despite the vagaries of life. Functionally, that means we trust what God says in the Bible, and not necessarily what the world or our own eyes tell us. We trust He will work out everything for good. We trust He will work His will in us. And we trust that our situation on earth is nothing compared to our future reward in heaven.”

He further noted that the only way they would have such resolute faith is through the influence of the Holy Spirit because He is the one who testifies to the truth and impels the believer to seek God, stressing that “the Spirit makes us faithful.”

Apostle Kumi-Larbi also advised the newly-commissioned ministers to be fully devoted to God and not to make for themselves “idols” in the course of the ministry since they serve a “Jealous God.”

“An idol can be in the form of anything that you might place in a higher priority over God. This includes false images of worship or placing anything in our lives that has preeminence over God,” he explained.

He also cautioned them to put their graces to productive use for the growth and advancement of the Kingdom business.

“As a member of the body of Christ, your life and ministry affect the well-being of the Church. The body of Christ will grow and be built up only “as each part does its work” (Ephesians 4:16). In other words, your part is essential! Every member of the church must, therefore, be committed to the Lord and the work He has entrusted to him/her.

He also urged them to make good use of their gifts because they would be required to account on how profitably they used their giftings to serve God’s purposes on earth.

To merit the commendation of a “good and faithful minister of Christ”, Apostle Kumi-Larbi advised the ministers to be utterly dedicated to their work, accurate and clear in their teachings, upright in their character and conduct and to be courteous and gentle at all times.’

He concluded his sermon by encouraging the ministers to keep their eyes on the great reward that is in store for them and to work towards achieving the prize heavenward.

He also read Psalm 37:28, Proverbs 16:6-7, Proverbs 28:20a and Revelations 2:10 to assure them that those who remain faithful to God receive manifold blessings here on earth and share in the Master’s happiness in heaven.