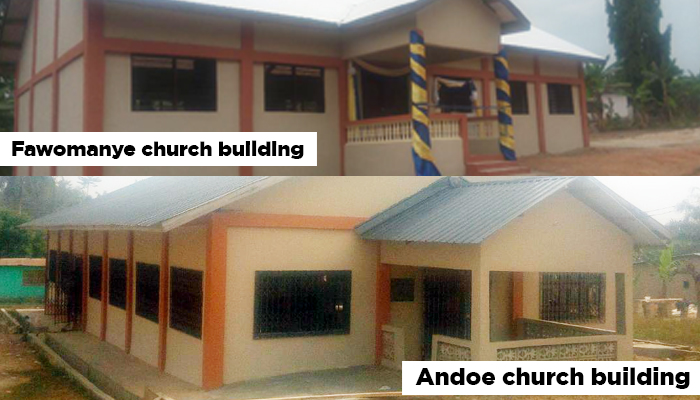 Assin Manso District in the Assin Foso Area of The Church of Pentecost has held separate dedication services for two church buildings in Assin Andoe and Breman Fawomanye.

The services which were well attended by members of the respective assemblies also saw the Area Head, Apostle Sylvester Arhin, ministers and their wives in the Area and chiefs and people of the two communities in attendance.

Speaking on the theme, “Remember Shiloh” (Jeremiah 7:1ff), Apostle Arhin explained that the name ‘Shiloh’ meant “place of rest.” He said it was a name that Jacob gave to the coming Messiah. According to him, Moses later named a city on the land of Canaan where the Ark of the Covenant and the Tabernacle was temporarily kept. He explained that Shiloh, therefore, became a place where anyone seeking the face of God came to.

He said that although the name Shiloh brought to mind God’s presence, the sinfulness of the people made the place lose its value, whilst the Ark was also taken away from there permanently.

“Do not dwell on the name ‘Pentecost’ and neglect the core object of our worship who is the Lord. Anytime you get entangled in sin, remember that the Ark was taken away from Shiloh when the people lived in sin,” he said.

The Assin Manso District Minister, Pastor Emmanuel Abugre, commended the members of the two assemblies for their hard work in ensuring the completion of the two buildings.

The dedication of the two projects brings to seven the number of dedicated church buildings in the district which was created in 1979.