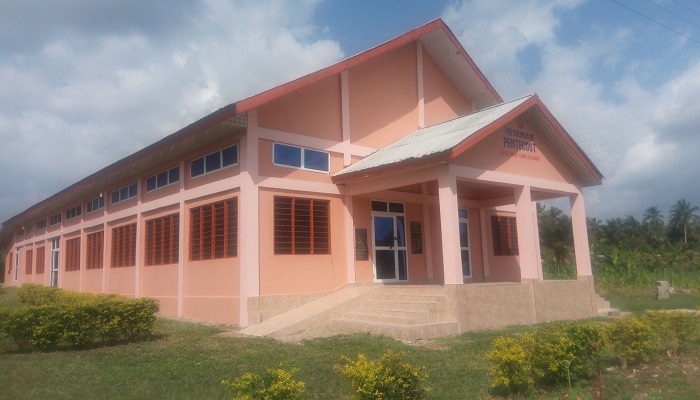 A colourful service has been held to dedicate the newly-constructed church building of the Assin Juaso Assembly in the Assin Nyankomase District of The Church of Pentecost. It was dedicated by the Area Head, Apostle Sylvester Arhin on Sunday, June 9, 2019.

The building which was constructed at a total cost of GH¢103,665.50, comprises a storeroom, an office, a conference room and a huge auditorium.

The Assin Juaso Assembly which now has an adult membership of 184, was started by the then District Pastor for Assin Foso, Pastor J. A. Mensah, in 1965 with a total membership of 20 people.

The Assembly began worshipping in a makeshift structure until 1990 when a permanent church building was constructed on an approximately 16-acre plot of land, which was acquired from the Late Chief of Assin Juaso, Nana Asiedu Munkuo II.

In the year 2000, the sod was cut to commence the construction of their newly dedicated Church building.

In a brief word of exhortation, the Assin Bereku District Minister, Pastor Samuel Avornyo, spoke on the theme: “The Priests Could Not Stand to Minister Because Of the Cloud.” Reading from 2 Chronicles 5:13-14, Pastor Avornyo referred to some of the happenings surrounding the dedication of the temple built by King Solomon.

He noted that, although the building of the temple was the brainchild of King David, he was not troubled when God wanted his son, Solomon, to put up the building.

Pastor Avornyo indicated that “King David, a decorated soldier would have wished to cap his years of military successes with the building of the temple for the Lord and knowing he could not, might have been a huge punch to his ego.”

He continued to explain that, untroubled, King David rather went ahead to gather all the needed materials for his son, Solomon, to complete the project in accordance with God’s will.

“We must understand that not all visions that we have will be fulfilled in our days. For some, we may have to prepare the way for others to run with them,” he reiterated.

The Assin Bereku District Minister also added that the holiness and obedience of the people towards the dedication of the temple were what caused the glory of God to fill the whole temple so much that, “the Priests could not stand on their feet.”

He explained that holiness and obedience to the leadings of the Holy Spirit allow the believer to experience the glory of God. “It is only then that God can impact his people with his awesome presence,” he stressed.