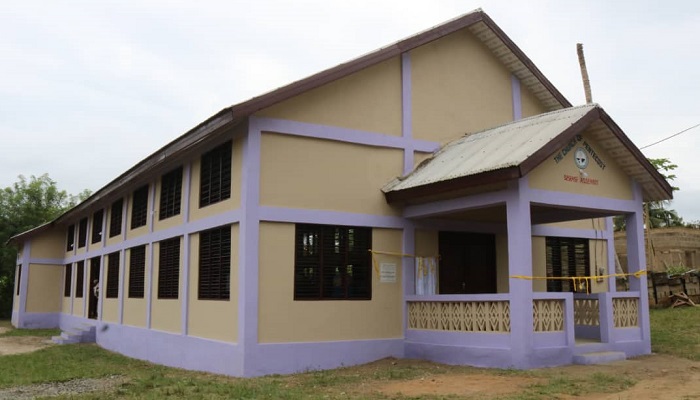 The newly-constructed church building of the Assin Besease Assembly in the Assin Foso Area of The Church of Pentecost has been dedicated to the glory of God.

The building was funded through grants from the COP Headquarters, Community Based Church Building (CBCB) initiative, AIDF, as well as contributions from members of the Local Assembly and Elder Dr. Samuel Amo Tobbin, Executive Chairman of Tobinco Group of Companies.

The Assin Besease church building was initiated in 1975 under the leadership of Pastor J.K. Appiah (of blessed memory) the then District Minister of Assin Foso.

The District was later moved to Assin Manso in 1980 when the District was created with Pastor John Ntsiful as the minister-in-charge. During this period, church services were held in a small classroom. The Assembly later acquired a parcel of land from Madam Ama Akyerem at a cost of GH¢20.00. A temporary bamboo structure was erected on the land to serve as a place of worship.

On June 29, 2004, Apostle G.K. Narh (now retired), the then Area Head of Assin Foso, cut the sod for the commencement of the church building. He was assisted by Pastor William Twumasi Ankrah who was the then District Minister.

On November 30, 2012, Apostle Emmanuel K. Apea (now retired) officiated the foundation-stone laying ceremony; he was assisted by Pastor Isaac Effisah, the then District Minister. Pastor Emmanuel Abugre took over as District in 2014 and supervised the project to its successful completion.

Delivering a brief exhortation on the topic: “Who Is On The Lord’s Side?” based on Exodus 32:26 at the event, the Assin Adiembra District Minister, Pastor Michael Antwi Boasiako advised Christians to be careful about the decisions they make especially during crucial times.

He referred to the story of the Israelites who became impatient when Moses went up to meet God on the mountain. According to him, their impatience caused them to ask Aaron to make them another object of worship.

He further noted that, although Aaron was the High Priest with the Israelites, he could not withstand the pressure from the people, and made for them a golden calf.

Pastor Antwi Bosiako, therefore, cautioned members of the Church to only put their hope and confidence in God and not to rely on any human being.