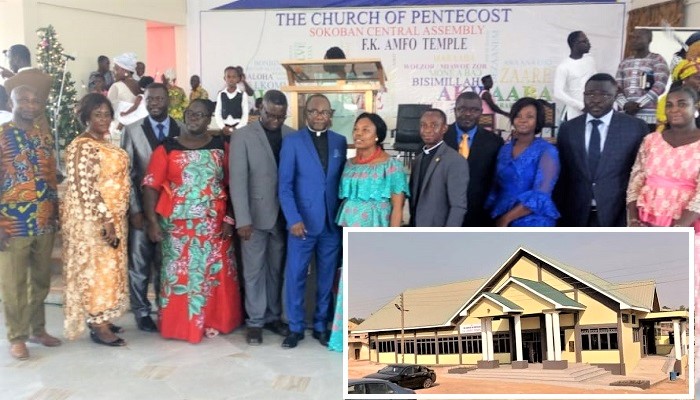 The Asokwa Area of The Church of Pentecost has honoured the memory of the late Frederick Kwaku Amfo by naming the newly-constructed Sokoban Central Assembly church building after him at a dedication service on Sunday, December 15, 2019.

The late Pastor Amfo was the Asafo District Minister when the then Sokoban Assembly (now District) was under as an assembly under the Asafo District. He served in the full-time ministry of The Church of Pentecost for twenty-five years. He was called to glory on February 18, 2014.

Speaking at the ceremony, Pastor Samuel Oteng of Gyinyase District urged the members to let the temple be a house of prayer as the Bible stipulates. He also noted that the temple should be a place of remembrance, healing, fellowship and love. He encouraged the congregation to make the church like the city of refuge in the Old Testament, where people could seek refuge in times of trouble.

The Asokwa Area Head, Prophet James Osei Amaniampong, who chaired the event, acknowledged the late Frederick Amfo’s love for children and encouraged the entire congregation to emulate his good example. It, therefore, came as no surprise when the family of the late Pastor Amfo made a generous donation of One thousand Ghana Cedis (GHS 1,000) to the Children’s Ministry of the Sokoban District.

In attendance at the ceremony was Apostle Abraham Swanzy, Director for Ghana Evangelism Committee and Pastor Gideon Amfo, Managing Director of Pentecost Press Limited, who happen to be son-in-law and son to the late Pastor Amfo respectively. The family members of the late minister and the area pastorate and their wives were in attendance.