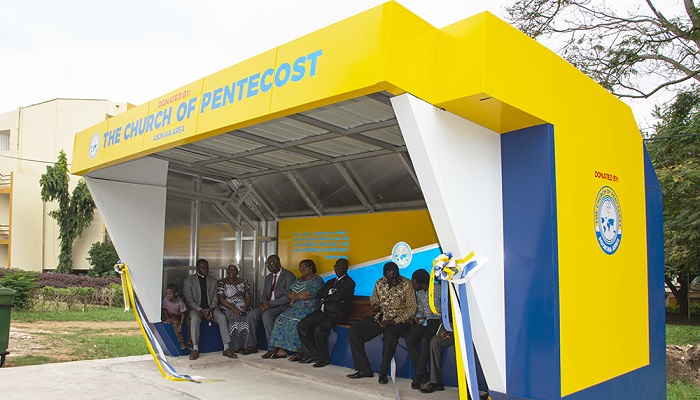 The Asokwa Area of The Church of Pentecost has donated a newly-constructed bus stop shelter situated opposite the Tackie Building to the Kwame Nkrumah University of Science and Technology (KNUST).

The Asokwa Area Head, Prophet James Osei Amaniampong, who dedicated the bus stop shelter, officially handed over the facility to the Vice-Chancellor of the University, Professor Kwasi Obiri-Danso and his team at a short dedication ceremony organised on Friday, August 23, 2019.

Speaking at the ceremony, Prophet Amaniampong said the donation is in line with the five-year vision of the church dubbed “Vision 2023: Possessing the Nations.” According to Prophet Amaniampong, among other things, the church aims to impact every sphere of society by creating a clean and safe environment for all. He also mentioned that the donation underscores the church’s commitment to contributing her quota to the development of the University.

In response, Professor Kwasi Obiri-Danso commended the church for their kind gesture and encouraged other churches to support the University in similar ways.

According to the KNUST Vice-Chancellor, the members of the church who form a greater part of the staff are outstanding in their field of work and celebrated the church for nurturing people with such outstanding characters.