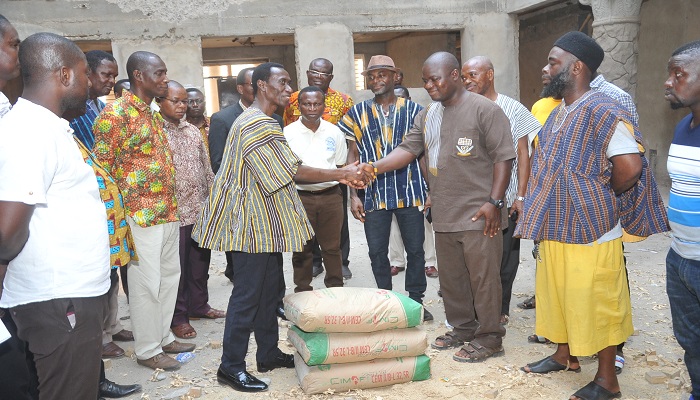 The Ashaiman Area of The Church of Pentecost has donated 200 bags of cement worth GH₵ 7,000.00 to the Chief of Ashaiman, Nii Annang Adzor and his traditional council in support of the palace building project.

The donation which took place on February 4, 2020, at the palace was in pursuance of the church’s Vision 2023 which is meant to impact and transform society with the values and principles of the Kingdom of God.

The Ashaiman Area Head, Prophet David Kankam Beditor, who led the delegation to the palace, prayed for the chief and his elders as well as the peace and prosperity of the municipality.

Prophet Kankam Beditor, who is an Executive Council Member of the church, urged other faith-based organisations and corporate bodies to support the multipurpose palace project which, he said, will bring total development to the municipality.

Receiving the items, Nii Annang Adzor on behalf of the traditional council expressed his gratitude to the church for the kind and timely support. He called on the leadership of the church to continue to pray for the Ashaiman municipality to bring about the needed development.

The sod cutting for the palace project was performed by Nii Adjei Kraku, Tema Mantse assisted by Nii Annang Adzor, Regent of Ashaiman, on March 5, 2012.

Present at the event were members of the Ashaiman Area Executive  Committee and the Area pastorate.