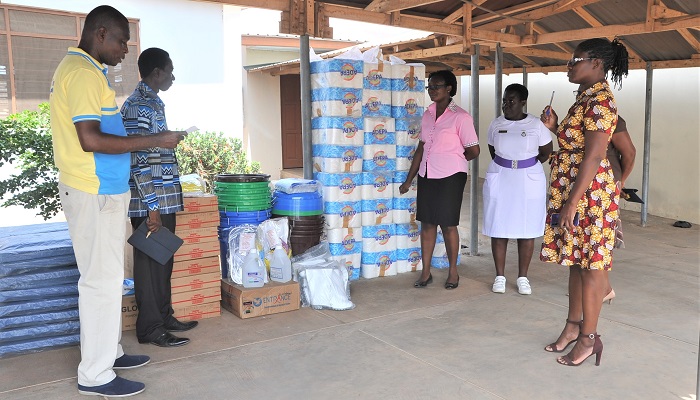 The Ashaiman Area of The Church of Pentecost has donated medical supplies to the Ashaiman Polyclinic to augment the efforts made by the government in the fight against the deadly Coronavirus in the Ashaiman municipality.

In a short presentation ceremony at the hospital on Tuesday, April 8, 2020, the Area Head, who is also an Executive Council Member of the church, Prophet David Kankam Beditor, presented 10 sets of personal protective equipment (PPEs), 16 Veronica buckets with standing tables and washbasins, 8 boxes of carbolic soap, 30 packs of tissue paper, 11 boxes of disposable gloves, 150 pieces of face asks, 5 gumboots, and a box of hand sanitiser to the facility on behalf of the church.

Presenting the items, Prophet David Kankam Beditor said the donation was to enhance the work of the health workers in the fight against the pandemic.

He also indicated that the donation was to demonstrate the continuous commitment of the church in throwing its full weight behind the government’s call for support to deal with viral disease.

Receiving the items on behalf of the facility, the Head of Nursing, Mrs Vivian Amponsah, thanked and commended the church for the gesture and for contributing its quota to support the government in containing the spread of the disease.