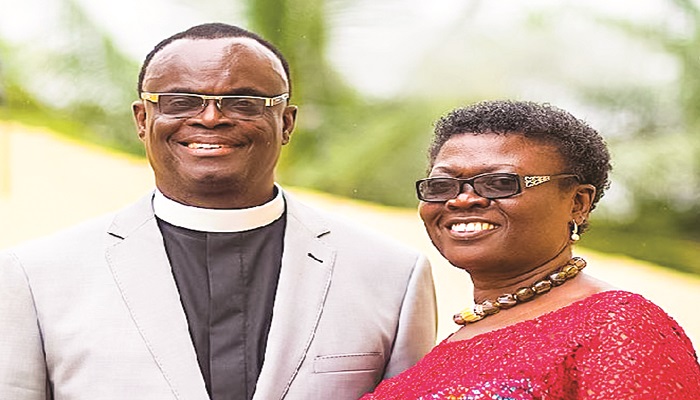 The Winneba Area Head of The Church of Pentecost, Apostle Prof. Peter Ohene Kyei and his wife, Abigail will be retiring from the active ministry of the Church on Sunday, August 18, 2019, at Winneba after serving in the full-time ministry for 11 years.

Born 66 years ago at Effiduase Dadease in the Ashanti Region to Pastor Emmanuel Kwadwo Kyei and Osofomaame Dora Ama Bawaa Kyei (both of blessed memory), Prof. Ohene Kyei began Primary School at Roman Catholic Experimental School at Ashanti Mampong, moved on to Adda Primary School in Navrongo and ended at Jacobu Catholic Primary School. He continued at Jacobu L/A No.3 Middle School, where he sat for the then Common Entrance Examination in 1968 and entered Amaniampong Secondary School, Mampong Ashanti for the General Certificate of Education – Ordinary Level (GCE ‘O’ Level). He continued to Apam Secondary School where he obtained the General Certificate of Education – Advanced Level (GCE ‘A’ Level) in 1974.

He proceeded to the University of Ghana, Legon and graduated in August 1979 with a Bachelor of Arts degree in Geography with Economics. After completing his National Service at Prempeh College, Kumasi, he entered the Kwame Nkrumah University of Science and Technology (KNUST) for his second degree and came out with a Master of Science degree in Regional Planning in 1983. In 1996 he was awarded a Ghana Government Scholarship to pursue a doctorate degree at the University of Durham in the UK, which he successfully completed in 2000. In 2016, while he was serving as the Rector of the Pentecost University College (PUC), the University of Ghana conferred on him Associate Professorship, in recognition of his contribution to geographical research and development.

After his Postgraduate studies, he taught at the Anglican Secondary School in Kumasi from 1983 to 1986. In August 1986, he was employed by the Ministry of Finance and Economic Planning as a District Budget Officer. He also worked as a Part-Time Lecturer at the Faculty of Social Sciences, at the KNUST. In November 1988, he was appointed a full-time lecturer at the Department of Geography and Rural Department and later became the Head of Department from 1990 to 1991 and from 2000 to 2005. He rose through the ranks to become a senior lecturer at the KNUST.

Apostle Prof. Peter Ohene Kyei accepted Christ as his Lord and saviour in 1968 at Amaniampong Secondary School. He became the Scripture Union (SU) Secretary in 1973 and was appointed the SU President in 1974.

He is a founding member of the Legon Pentecostal Union (LPU), the first Pentecostal Student Movement at the University of Ghana in 1976.

He was the President of Legon Outreach (Students Evangelistic Group under the University Christian Fellowship from 1978 to 1979.

He is also one of the pioneers and founding members of the Pentecost Students and Associates (PENSA) which was started in 1980.

He is a founding member and the first Presiding Elder of the Pentecost International Worship Centre (PIWC) in Kumasi and served in that capacity for ten years, from 1986 to 1996.

He was called into the full-time ministry of the Church as a Pastor on 3rd August 2008 and was inducted into office as the Rector of the Pentecost University College (PUC) where he served for eight years, from 2008 to 2016. He was appointed an Area Head in 2016 and transferred to Winneba Area.

Apostle Peter Ohene Kyei got married to Dr. Mrs. Abigail Agartha Kyei, when both of them were in Bompata Assembly of the Church in Kumasi, on 3rd December 1983. They are blessed with four daughters and a son: Mrs. Dora Bawaa Asamoah, Mrs. Eunice Tweneboaa Adu, Dr. Mrs. Elise Tirza Danso, Abigail NanaTenewaa Ohene-Kyei and Peter Kwaku Ohene-Kyei. They have four grandchildren.

We give thanks to the Almighty God for endowing them with graces to successfully end the race. To God be the glory!