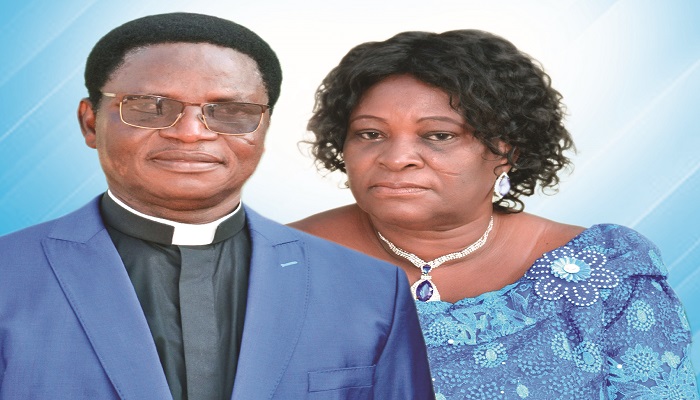 The Ashaiman Area Head of The Church of Pentecost, Apostle Patrick Kingsley Ennin and his wife, Grace will bring the curtains down on their 33 years of dedicated services in the full-time ministry on Sunday, August 18, 2019, at Ashaiman.

Apostle P. K. Ennin was born on 24th July 1954 at Winneba in the Central Region to the late Opanin Kofi Attah and the late Obaapanin Amma Essoun, both natives of Winneba.

He started Primary and Middle School education at Don Bosco School at Winneba and completed in 1971. He continued at Swedru Technical Commercial College from 1971 to 1974. His educational career was truncated when he lost his father in 1974. His employment career began at Ekem Art Poetry at Winneba from 1974 to 1986. Due to his diligence and commitment to duty, he was transferred to the company’s branch in Liberia from 1979 to 1981 and promoted to the rank of a Deputy Manager. He was later transferred back to Ghana from 1981 to 1986 as a Supervisor.

Patrick accepted Jesus Christ as his Lord and personal Saviour in 1972 and was baptized by immersion by Pastor J. E. Wilson (now late) at Winneba. He received the Holy Spirit baptism in the same year. He zealously served the Lord and was appointed as the Local Witness leader, Chorus Leader and Leader of the Prayer Warriors in Winneba. He was ordained as a Deacon in 1978 and as an Elder in 1983 by Apostle F. D. Walker (now deceased) and appointed as a Presiding Elder of Winneba Central Assembly in 1984.

He was earlier recommended into the full-time ministry of The Church of Pentecost by Apostle F. D. Walker in 1980 while he was working in Liberia. He finally heeded to the call in 1986 when he returned to Ghana upon recommendation by Apostle D. Y. Owusu (now deceased). He was confirmed as an Overseer in 1988 and called into the Pastorate in 1991. He was appointed as an Area Head in 2002 and posted to Agona Swedru Area. In 2005, he was ordained as an Apostle and transferred to Nigeria as a Resident Missionary and National Head. As a minister of the Gospel, he has served at various stations and also held various positions.

He got married to Grace Emelia Sam, who was then working as a Clerk at the Swedru Court in 1979. They are blessed with two children: Mrs Grace Gloria Aidoo and Mr Richard Kwesi Ennin.

The Lord has been so faithful to him and his family in the past 33 years. May His name be forever praised.