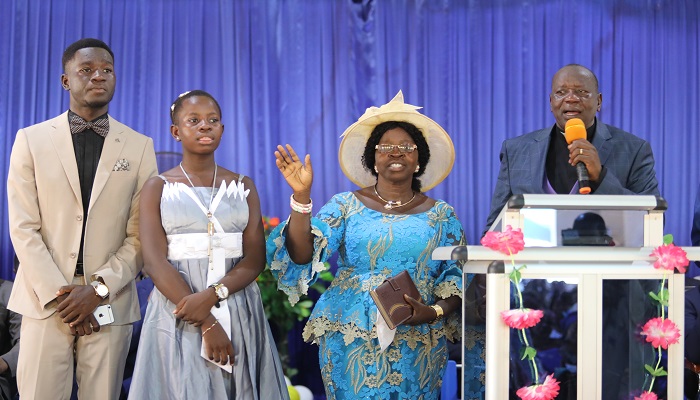 Apostle Ousmane Patinde Zabre, an Executive Council Member of The Church of Pentecost and National Head of Togo, has been applauded for providing quality leadership which has led to the exponential growth of the Church in Togo.

The International Missions Director (IMD) of The Church of Pentecost, Apostle Emmanuel Gyesi-Addo, made the commendation during a farewell service organised for Apostle Ousmane Zabre and his family at the National Headquarters of the Church in Lome, Togo on Sunday, August 25, 2019. Apostle Zabre has been transferred to Burkina Faso after eight years of dedicated missionary work in Togo.

The event which coincided with the welcome service of the incoming National Head, Apostle Komi Edina Agbavitoh and his family, was attended by ministers of the Church and loved ones from far and near. Prominent among them were Apostle Dr Emmanuel Anthony Owusu (National Head of Canada and Executive Council Member), Apostle Marc Koffi Fatchao (National Head of Benin), Apostle Samuel Appiah (National Head of United Arab Emirates) and Area Heads from the Volta and Oti Regions in Ghana.

Speaking at the service on the topic, “Leading God’s People to Possess the Nations” with Exodus 3:10 as his main text, Apostle Gyesi-Addo said that leadership is one of the greatest gifts God has given to mankind. He added that God works among humanity through people He chooses to lead. He indicated that the work of the leader is to galvanise the people into action.

“I want to thank God for the life of Apostle Ousmane Zabre. He is a leader; courageous man who is humble, goal-oriented, sympathetic, hardworking, truthful, fair and just.

“Anytime I come to Togo, I hear good things – from the National Executives to the pastorate, even the office staff – they all testify to the goodness of God to the life of Apostle Zabre.

“As we are possessing the nations, we want to thank God that He has given us leaders like him [Apostle Zabre] who are leading the people of God to possess the nations,” the IMD stated.

Explaining his theme scripture, Apostle Gyesi-Addo said that though it was God who delivered the Israelites from Egypt after 400 years of servitude, He chose Moses to lead the process. Ultimately, everything rests on God, he said, God expects leaders to play their roles faithfully no matter how small it is to fulfil His mission on earth.

“The leader ensures that we have the kind of people we need to possess the nations so that we can transform every sphere of our society to turn the world around for Christ,” he stressed.

Apostle Gyesi-Addo charged Christians to go far in their service to God and not to settle for the little pleasures the devil entice them with. To go far, he advised them to persevere in spiritual exercises like fasting and prayers, discipleship, church attendance, reading the Bible and personal evangelism, saying, “In possessing the nations, we need to go far to possess everything God has given us; we need to go out there to evangelise and win souls for Christ.”

The International Missions Director called on the church in Togo to support their new National Head, Apostle Agbavitoh and his family in order to succeed. “We pray that you will support Apostle Agbavitoh and his family because no matter how good a leader is if the people put too much pressure on him as the Israelites did to Moses who couldn’t get to the Promised Land, the leader would fail,” he said.

In their testimony, the National Executive Council described Apostle Ousmane Patinde Zabre as a charismatic and transformational leader who set everything in place to bring a radical change for exponential growth. “Papa Zabre is a loyal leader, honest and truthful; there is no hypocrisy in his life. He is a self-educated person who has knowledge in almost all domains,” they said.

The Church, some organisations and individuals presented gifts and citations to him and his family.