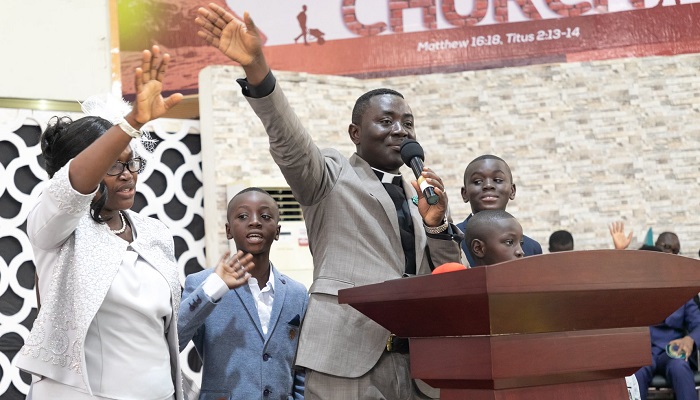 A glorious farewell service was held at the PIWC-Dansoman church auditorium on Sunday, July 28, 2019, in honour of Apostle David Nyansah Hayfron and his family after successfully ending his two-term mandate as Director of the Youth Ministry.

The event, which was officiated by the Chairman of The Church of Pentecost, Apostle Eric Nyamekye, also witnessed the induction of Pastor Ebenezer Hagan and Elder Prof. William Otoo Ellis into office as Director and Deputy Director of the Youth and Children’s Ministries respectively.

He was also commended for the notable initiatives that were undertaken by the ministry during his tenure as Youth Ministry Director including: review of the Youth Syllabus, introduction of the Youth Pastors concept, the Political and Business Chamber, School of Apologetics, the new Youth Cloth, Win Team Concept, Writers Contest and the Pent Onyx Studios.

“Other national activities such as PENSA Conferences, Pentecost Young Missionaries (PYM), Youth Quiz, Youth Camp Meetings and Youth Mega All Night services were highly intensified, and they made an enormous impact on the Youth and the church,” the testimony read.

Mrs. Sheila Nyaniba Hayfron was also acknowledged for her unflinching support to her husband’s ministry and for her instrumentality in editing the scripts for the ministry’s Devotional Guide as well as the Young Adult and Teens Syllabi.

“Mama Sheila is very humble, respectful and shows deep motherly love for all; this draws both the young and old to her. She is a teacher and a very good counsellor; this was seen in her ministrations during conferences and youth gatherings. She has greatly impacted the young ladies, especially the wives of Youth pastors and travelling secretaries,” the testimony further read.

In his response, Apostle David Nyansah Hayfron was grateful to God for seeing him through his mandate successfully. He was also grateful to the Chairman, Apostle Eric Nyamekye, under whom he served when he was Patron of the Youth Ministry, as well as the immediate-past Chairman, Apostle Prof. Opoku Onyinah, for the confidence reposed in him to lead the ministry at a very young age.

The outgone Youth Ministry Director also extended gratitude to various individuals who contributed in diverse ways to his ministry. He also took the opportunity to encourage his successor, Pastor Ebenezer Hagan, not to be intimidated by the task entrusted to him but to rely on the Almighty One who saw him through his mandate to a successful end.

Also in attendance were National Executive Committee Members of the Youth Ministry, Staff of the COP Headquarters, members of IBE Assembly, where Apostle David Nyansah Hayfron and his family fellowshipped until the end of his service as Youth Ministry Director, as well as relatives and friends of the Hayfron family.