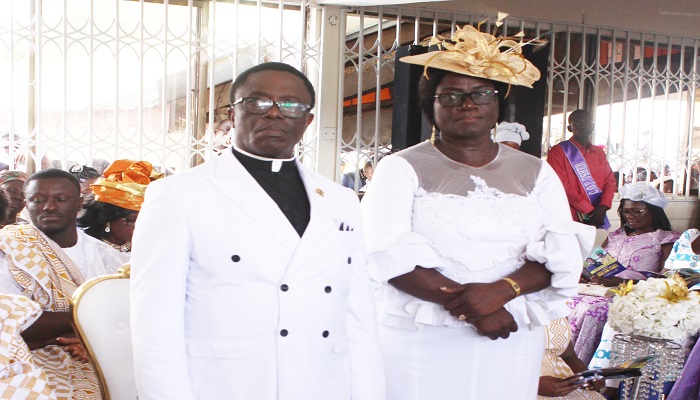 The Berekum Area Head of The Church of Pentecost, Apostle Anthony Kingsley Miah and his wife, Mama Mary were gracefully retired from the active ministry of the Church on August 18, 2019, at the Ahenbronoso Church Auditorium in Berekum.

Apostle Miah, who was born on October 24, 1954, at Aiyinasi in the Western Region, was called into the full-time ministry of The Church of Pentecost in 1983.

Various testimonies said about Apostle A. K. Miah and his wife described him as a Spirit-filled genuine man of God, prayerful, teacher of the word of God, evangelistic and a true disciple of Christ.

The General Council further described him as a type of minister who did not only promote the interest of The Church of Pentecost but the Body of Christ as a whole. “He is an encourager and a visionary leader. He is also known to be a very principled, disciplined yet jovial and impartial leader.

Speaking at the retirement service, Apostle Mark Obeng Andoh, an Executive Council Member of the Church who is also the Area Head of Sunyani, said there is a reward for good service on earth just as it is in heaven.

Speaking on the topic: “Your good works will not go unrewarded” with scripture reference from Hebrews 6:10-11, Apostle Obeng Andoh said anyone who serves well would get good reward even on earth. He, therefore, encouraged Christians to know that God will not lose sight of their good works and will definitely reward them in good time.

Apostle Mark Obeng Andoh, who is also the Chairman of the Bono Ahafo Regional Coordinating Committee, assured Apostle Miah and his wife that they would experience more of God’s goodness in their retirement.

Finally, Apostle Andoh, on behalf of the Executive Council of the Church, presented a certificate of service among other things to Apostle A. K. Miah. Afterwards, a prayer was said for Apostle Miah and his family.

The programme was well attended by both Ghanaians from different parts of the country and foreigners alike. Also in attendance were Apostles and Prophets of the Church, chiefs, politicians and members of the media.