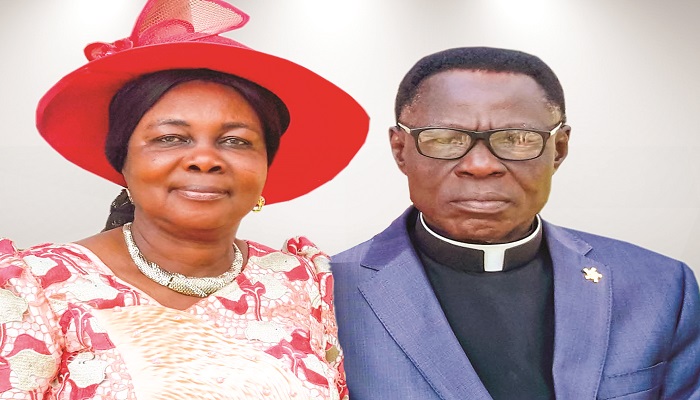 The Goaso Area Head of The Church of Pentecost, Apostle Isaac Kwasi Amoako and his wife, Sabina will be bringing down the curtains on their 28-year active service in ministry on Sunday, August 18, 2019, at Goaso, the Ahafo Regional capital.

Apostle Isaac Kwasi Amoako was born on October 13, 1954, at Asante Mampong, in the Ashanti Region to Opanin Kwaku Boateng of Benim and Madam Mary Ama Akoto of Asante Mampong-Daaho (both of blessed memory).

He started primary school at Asante Mampong Roman Catholic School and continued at Tarkwa Urban Council “A” School. He went back to Asante Mampong Roman Catholic Middle School where he obtained the Middle School Leaving Certificate (MSLC) in 1971 with distinction and also sat for the Common Entrance Examination in the same year. He passed and had admission to the Konongo Odumasi Secondary and Sunyani Technical Schools but he could not go because of financial constraints. He had earlier written the late entrance exams in 1970 and gained admission to Saint Anne’s Academy in Kumasi with half scholarship but could not also make it.

Young Amoako was an active sportsman and a great footballer. As a good goalkeeper, he had the ambition to become like the late Robert Mensah, one of Ghana’s finest goalkeepers, as well as secure a place in the goal post of Kumasi Asante Kotoko Football Club.

He, however, worked with the Ministry of Agriculture (UNDP/FAO) from 1972 to 1991 at Mampong, Kumasi and Ejura. By dint of hard work, he rose from a labourer to Stores Assistant and later to Principal Storekeeper.

He had lived a life of drinking and smoking and even cultivated Indian Hemp (Weed) for personal consumption. However, he was led to Christ at a rally that was held at Ejura-Bonyon and was baptised on 5th May 1980 by Apostle Moses Ladejo (now retired). Later in the year, he received the baptism of the Holy Spirit.

He became an eager disciple of Christ who learnt very fast from the leaders of the church. He was privileged to receive discipleship and mentorship training from the then Deacon J. K. Badu of Ejura, who is now an Elder of the Church. Other mentors were Elders F. C Acquah, Tetteh, Arhin, Sarfo, Adawu, Munoo (all of Ejura) and Osei Kwaku of Asante Mampong.

Before his call into the full-time ministry, Isaac was to attend an interview for the position of a Supply Officer, which was a Senior Officer’s Grade.

He was called into the full-time pastoral ministry in 1991 at Asante Mampong, having taken care of Mampong District for two years as the Central Presiding Elder. He was ordained as a pastor in 1995, became an Area Head in 2014 and was subsequently ordained as an Apostle in 2015.

After the home-call of his first wife, Elizabeth Ama Amoako, Isaac married Sabina Abena Amoako and together they have four lovely children: Celestina, Dorcas, Simon, Lois, and have other adopted children; Asare, Becky, Kwakyewaa, Cecilia, Prince, Isaac, Adwoa, Abigail and have been a father to many others.

We are very grateful to God for preserving him and his family throughout the 28 years in the ministry. To God be the glory!