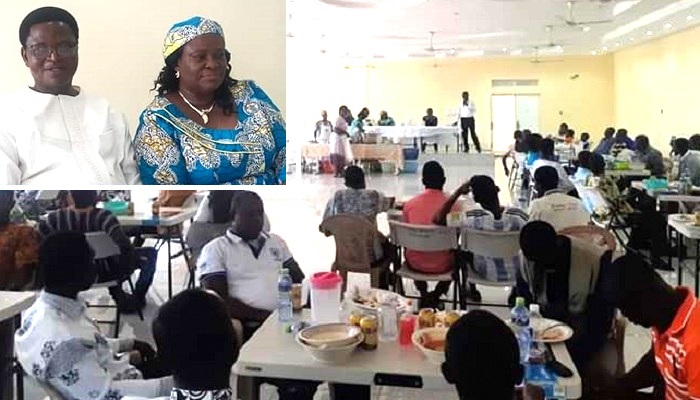 The immediate-past Ashaiman Area of The Church of Pentecost (COP), Apostle Patrick Kingsley Ennin (Rtd.), and his wife, Mrs. Grace Emelia Ennin, organised a grand dinner for all artisans in the Ashaiman Area on Sunday, September 8, 2019.

The event took place at the conference room of the recently-dedicated James McKeown Temple, which serves as the central seat of Ashaiman Area.

According to Apostle Ennin, the purpose of the event was to express his family’s hearty appreciation to the artisans headed by Elder Asamoah for their selfless commitment and godly teamwork which contributed massively to the successful infrastructural developments in the Ashaiman Area during his tenure as Area Head.

Apostle Ennin advised them to continue to serve the Lord faithfully while working hard to achieve the 5-year vision of the church (Vision 2023).

On their part, the artisans were grateful to Apostle Ennin, whom they affectionately call the “Bulldozer”, for allowing them to contribute to the great legacy he has left in the area. They described him as one who always finds rapid solutions to problems wherever he finds himself. They also acknowledged his benevolent nature due to his willingness to always assist others in their times of need.

Apostle Patrick Kingsley Ennin served as a minister of The Church of Pentecost for thirty-three years and ended his pastoral service in the Ashaiman following his retirement from active service on Sunday, August 18, 2019.

During his retirement service, Apostle Ennin again demonstrated his great sense of generosity by donating his entire End-of-Service package in support of the COP Chairman Education Foundation, an act which has earned him worldwide praise.