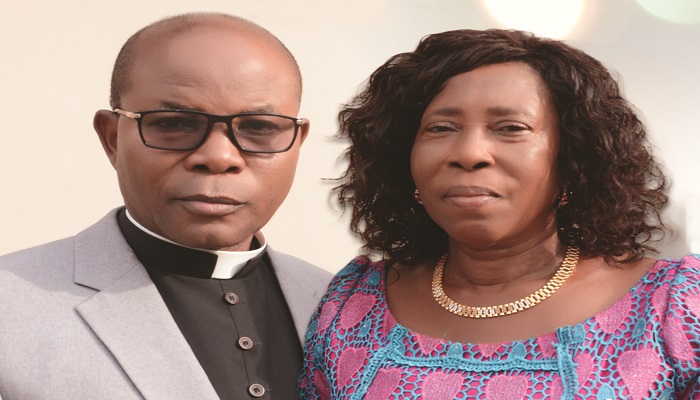 The Madina Area Head of The Church of Pentecost, Apostle Anthony Kwabla Ahalivor and his wife, Rose will on Sunday, August 18, 2019, bring their 33 years of dedicated service in the full-time ministry to a glorious end as they go on retirement.

Born 65 years ago at Adutor in the Volta Region to Degbe Ahalivor and Anastasia Agbekoh, both of blessed memory, Apostle Ahalivor started his primary education at Adidome Primary School, then continued at E. P. Middle “B,” later at R. C. Middle “A” and finally completed at Samereboi L. A. Middle School in 1971. He gained admission into Sogakope Secondary School and Kpando Technical Institute, but he could not go due to financial constraints.

He did not relent on his oars to pursue higher education and so, whilst he was in ministry, he pursued a Bachelor of Theology and Missions degree at the Pentecost University College.

Prior to his calling into the full-time ministry, Ahalivor was employed at GOIL (then known as AGIP), where he was trained and worked as a Pump Mechanic.

He got converted into The Church of Pentecost, through Elder Gabriel Adjaklo, and was baptized by immersion by Pastor E. K. Kyei (of blessed memory) in 1975. He was ordained as a Deacon in 1979 and an Elder in 1980.

He was called into the full-time pastoral ministry in 1986 whilst serving as a Presiding Elder at Oduom Assembly in Kumasi. The recommendation came from the then Regional Head of the Volta Region, Apostle Opoku Onyinah, who was his former District Pastor in Kumasi. He had wanted Anthony to be posted to him in the Volta Region in 1985. However, the call could not materialize that year but came to past in 1986 when the then Pastor Emmanuel Asante, now Apostle Emmanuel Asante (Retired) was the Kumasi District Pastor and Apostle A. T. Nartey, of blessed memory, was the Ashanti Regional Head.

Apostle Anthony Ahalivor got married to Rose Wornyo in 1978. Their marriage has been blessed with six children. They have also taken care of many other children in addition.

We give God all the glory for guiding him and his family through 33 years of pastoral ministry.