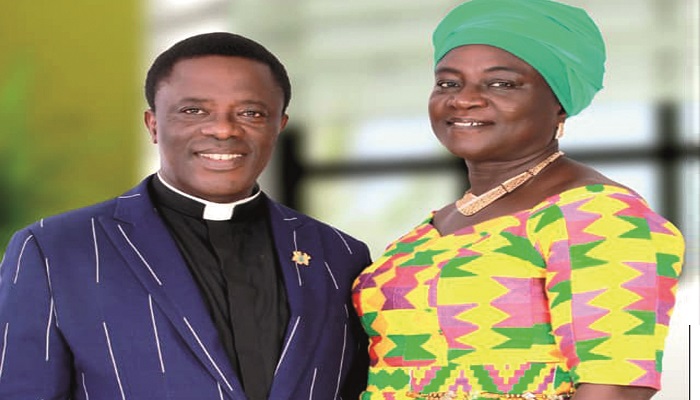 The Berekum Area Head of The Church of Pentecost, Apostle Anthony Kingsley Miah and his wife, Mary will be retiring from the active ministry of the Church on Sunday, August 18, 2019, at Berekum after 36 years of dedicated services to God and humanity.

Born 65 years ago at Aiyinasi in the Western Region to Opanin John Kodwo Miah and Madam Theresa Akromah Ennah, Anthony Kingsley Miah had his secondary education at Kumasi Secondary Commercial College (KISCO), where he graduated with a Diploma in Business Studies and London Chamber of Commerce Intermediate Certificate, Royal Society of Arts (R.S.A) in Accountancy Stage II and General Certificate of Education Ordinary Level (G.C.E. – O Level). He also had a Bachelor’s Degree in 2006 and a Master’s Degree in Theological Studies from Middleham University and Canada Christian College respectively.

From 1975 to 1983, he worked with Ghana Cocoa Marketing Board (G.C.M.B) as an Administrative Clerk and rose through the ranks to become a Senior Accounts Officer.

He accepted Jesus as his Lord and Saviour and was baptised by immersion by Pastor J. A. Ocran (now of blessed memory) on April 23, 1972.

He was ordained as a Deacon and an Elder of the Church in 1976 and 1978 respectively. He served as Presiding Elder at Sefwi Bekwai from 1981 to 1983 and also served as the Sefwi Bekwai District Secretary at the same period. From 1980 to1983, he served as PENSA Secretary for the then Sefwi-Denkyira Region.

Apostle A. K. Miah is married to Mama Mary. Their marriage is blessed with six children, namely Ebenezer, Seth, Emmanuel, Joseph, Grace and Joshua. They have also adopted other children.

As a prolific writer, Apostle Miah has authored two books; Character and Charisma (2009), and The Holy Spirit, Unction to Function (2013). Two other books; Jesus of Nazareth, and Passion for God’s Work, are at the press. He has also written numerous articles in the Pentecost Herald (Canada) and Pentecost Fire Magazines.

We thank the Lord God Almighty for taking care of him and his family throughout the 36 years he has served in the ministry. To God be the glory!