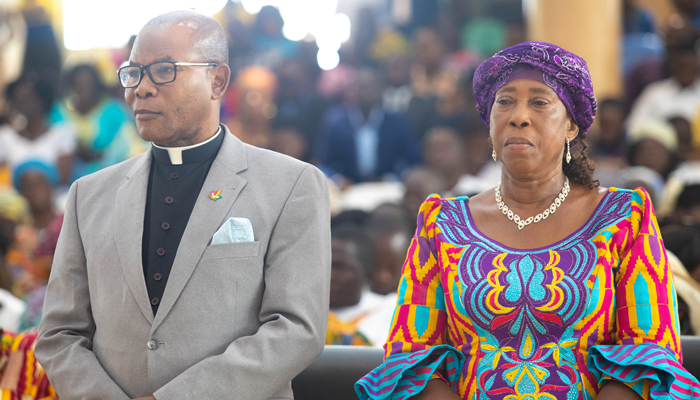 A glorious retirement service was held on Sunday, August 18, 2019, at the Pentecost International Worship Centre (PIWC-Atomic) in honour of Apostle Anthony Kwabla and Mrs Rose Ahalivor.

Speaking at the service on the topic, “Do your part to the end” with Ecclesiastics 1:4 and 7:8 as his main texts, the former Chairman, Apostle Prof. Opoku Onyinah, pointed out the various questions King Solomon asked himself about life and his final recommendations after his rigorous research.

Apostle Prof. Opoku Onyinah used various life experiences to explain his point. According to him, the writer of Ecclesiastics, King Solomon, was disturbed about the purpose of life and whether it was worth living, and whether it was important to do good since sometimes good people die young.

He said that King Solomon in his quest to seek an understanding of these life intriguing issues, did research and his research were grouped into four areas; education, wealth, entertainment and pleasure, and social justice.

He outlined the recommendations of King Solomon: Remembering the Creator in the days of your youth; doing good with expected reward (Ecclesiastics 11:1-2); living a balanced life in whatever we do (Ecclesiastics 7:16-18) and fearing God and keeping His commandments.

The former Chairman pointed out that the world is so hollow that unless God fills it, it shall remain the same, saying, “In this life, do your part gently and don’t try to be over righteous or be over wicked; avoid all extremes, mind your business, and do what God has assigned you to do.”

He further said: “There are many things that will not be understood in this world, and the solution of all the problems of the world is not pleasure, entertainment, education, but Christ.”

Apostle Prof. Opoku Onyinah ended by thanking God and His servant Apostle Ahalivor for his selfless service towards God and man. He challenged the congregation to do the part that has been given to them by God so that they too would end well.

Giving testimonies about Apostle Ahalivor, the Madina Area Presbytery described him as a strong and vibrant personality, very kind, concerned, understandable and a very good listener to everyone who gets close to him. “He is a man of principle, a media-friendly, someone who always ensure teamwork and a man of prayer,” they added.

The Madina Area Women’s Ministry also described Mrs Rose Ahalivor as humble and affable. “Regularity and punctuality are her hallmarks. She is supportive, committed, understanding, available and ready to offer suggestions for the growth of the Women’s Ministry,” they said.

In his final words, Apostle Ahalivor thanked everyone who helped him in his life and his ministry. He also thanked the late Elder Lawyer Glover for all his support.