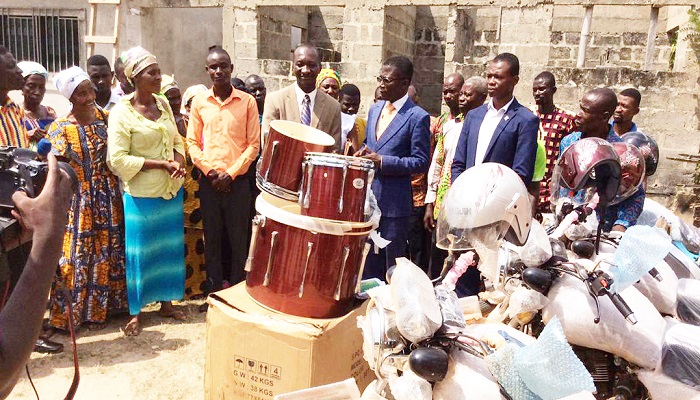 An anonymous philanthropist has donated three motorbikes and one tricycle worth GH¢ 20,000.00 to the Anakum District in the Asankrangwa Area of The Church of Pentecost.

Another person, Elder Aaron Amponsah from the Koforidua Effiduase Area of the church, has also donated a set of drums worth GH¢ 3,500.00 to the same district.

The donations formed part of their contributions towards promoting the work of God in the Anakum District.

Presenting the items to the beneficiary district on behalf of the philanthropists on December 6, 2019, the immediate past Anakum District Minister, Pastor Isaac Donkoh, who is the current Travelling Secretary for Kwadaso Sector, said the donors promised to help his ministry at Anakum during his time as the district minister.

According to Pastor Donkoh, visiting the members in the hinterlands was a big challenge due to the poor nature of the roads in the area. “My presiding elders had to walk for so many miles to reach out to the members and walk back home after services. This was one of my burdens throughout my ministry in Anakum, but thank God for these kind-hearted men who promised to support us. Thank God that they have fulfilled their promises even when I had left the district,” he said.

The Asankrangwa Area Head, Apostle R. C. Ackon, who received the items on behalf of the district, commended the donors for their kind gesture. He described the donation as timely as it will help to facilitate the kingdom business in the district.

Present at the short ceremony were Pastor Johnson Ayidaana (Anakum District Minister) and the Officers and members of the district.