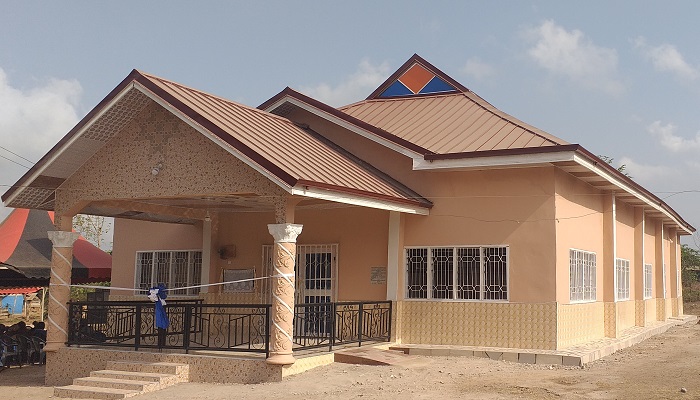 The Amasu District Central Assembly Church building in the Berekum Area of The Church of Pentecost has been dedicated to the glory of God. The facility which cost GH₵ 76,735.00 to construct was dedicated on Friday, March 1, 2019.

The building was constructed some years back but had to be restructured and re-roofed to make it conducive for a place of worship.

Speaking at the programme, Pastor Samuel Ofori Gyimah of Drobo Krupiase District, in a message titled, “I am a Dedicated Temple of God” (Leviticus 6:8-13; 9:24; 2 Corinthians 7:1-2), said when the Priests offered the pleasing sacrifice to God, fire fell from heaven and consumed it.

He said the Priests were charged to keep the fire on the altar burning always. In like manner, he indicated, after King Solomon had prayed over the Temple he built, fire fell from heaven and consumed the offering. He however noted that, these Tabernacles/Temples were built with human hands.

“Today, Christians are the temples built by God Himself to offer sacrifices/serve to Him continually. On the day of Pentecost, the Holy Ghost fell on the disciples who were gathered at one place in prayer to empower them for the work of service.

“The coming of the Holy Ghost empowered the disciples and spiritually dedicated them for use and so the Christian does not need to burn animals as sacrifice to God again, but to offer their bodies as living sacrifices unto God. Therefore, those who have the Holy Spirit in them have been dedicated by God to do good works and to overcome the evil one and his activities,” he said.

Dedicating the building, Apostle Anthony Kingsley Miah (Berekum Area Head) expressed his appreciation to the District Minister, Pastor Ernest Agyei and his wife for their immense contribution towards the project.

He admonished the members to take good care of the building. He also prayed that the place becomes a solution centre where every need will be met.

In a related development, the Area Head has dedicated the Aboabo No. 4 Community Based Church Building (CBCB), also in the Amasu District. The construction of the building which started in 2016 cost GH₵56,345.00.

In attendance were ministers and their wives in the Area, the District Police Commander, Elder Dr. Yao Yeboah, the immediate past Director of PENTSOS and the Queen Mother of the community, among others.