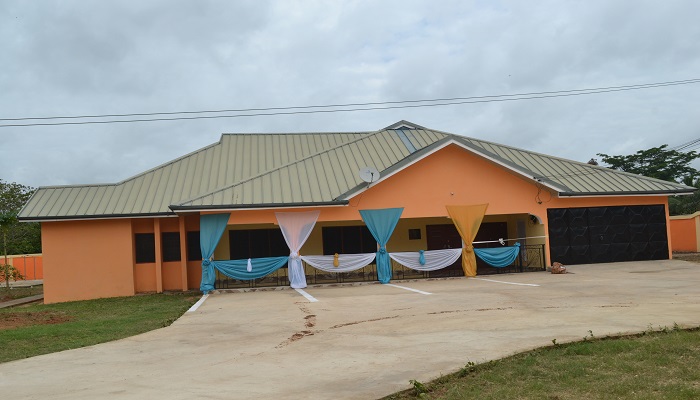 A special service has been held at Akyem Sekyere in the Suhum Area of The Church of Pentecost to dedicate their District Mission House constructed at a cost of GH¢173,000.00

The dedication service, which was held on Sunday, April 14, 2019, was officiated by the Suhum Area Head, Apostle Anthony Eghan Kwesi Ekuban, assisted by the Akyem Sekyere District Minister, Overseer Peter Narh. Also, present at the service were the wife of the Area Head, Mrs. Jennifer Ekuban and the Pastorate in the Area.

The district was created out of the Anyinam District on August 29, 2010. The land on which the mission house is situated was acquired by the Macedonia assembly at a cost of 15 Shillings from the late Opanyin Koofie in 1974. The sod-cutting ceremony for the commencement of the construction of the project was performed by Apostle E. K. Akpabli (now retired), the then Area Head in 2011, and the foundation stone laid by Apostle Blessed Bonney (now retired) in 2013, assisted by Overseer Francis Agyei, the then District Minister.

In a sermon, Pastor Emmanuel Anane, the District Minister of Abomosu, admonished Christians to remain focus and hold fast unto their salvation received and not concentrate on prosperity.

Speaking on the topic, “Now I Know That the Lord Will Be Good to Me” taken from Judges 17:8-13, Pastor Anane indicated that some Christians go to church with the primary aim of acquiring wealth but not salvation. “Man does not go to church for prosperity but salvation,” he said.

He expounded that after salvation, Christians should also propagate the gospel and save lost souls. He urged Christians to preach Christ with their behaviour and attitudes.

Touching on the Environmental Care Campaign instituted by the leadership of the Church, Pastor Anane posited that if the earth and everything in it belongs to God and Christians are children of God, then they should keep the environment clean at all times.