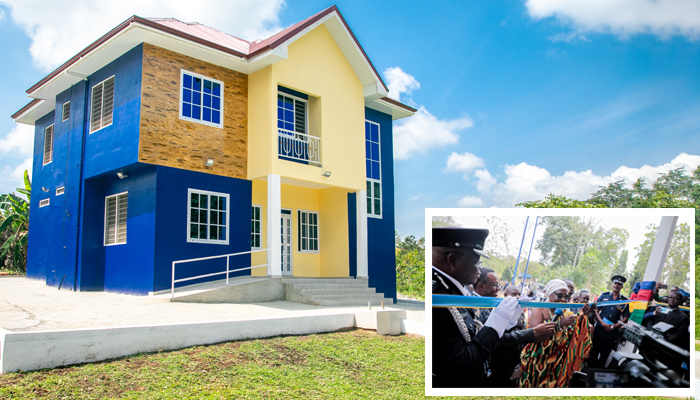 The Akuapem-Akropong District Police Headquarters fully funded by The Church of Pentecost has been commissioned and handed over to the Police Administration.

The building which took six months to complete was constructed at the total cost of GH¢516,000.00. It has male and female cells at the ground floor, offices, armoury, washrooms, District Commander’s office and other ancillary spaces and circulation areas.

The sod-cutting of the building was performed by the immediate past IGP, Mr David Asante-Apeatu and the General Secretary of the church, Apostle Kumi-Larbi, on 26th April, 2019. The project commenced in June 2019 and was completed in December 2019.

Speaking at the event on behalf of the Chairman of the church, Apostle Eric Nyamekye, the General Secretary explained that the construction of the facility formed part of the security-based development project dubbed “Police Station & Post Project (PSPP) under Vision 2023, where the church has planned to put up three different police stations/police posts in some selected communities across the country.

This, Apostle Kumi-Larbi said, has become necessary due to the exponential growth of urban population in recent times and its related socio-economic challenges and pressure on the existing structures of the Police Service some of which have already outlived their useful years.

“We are very grateful to God as a Church for such an opportunity to contribute towards national development and specifically to the Ghana Police Service,” he stated.

Espousing the clarion call for upholding integrity at all levels, the General Secretary called on the citizenry to do right, act right and maintain the good name of Ghana by acting responsibly to ensure the accelerated development of the country.

Calling on the Ghanaian police to uphold integrity and high professional standards, he noted that the motto for the Ghana Police Service which happens to be ‘Service with integrity’ “incidentally strikes a chord to us as a Church with the goal to possess the nations. Living a life of integrity as Christians is one of the main thematic areas The Church of Pentecost intends treating as part of its 2020 theme which is “A glorious Church to possess the nations.”

According to him, the present generation critically needs leaders with integrity – people who cannot be bought, will not compromise with wrong, will walk the talk, and will be completely honest in small things as in great things.

Unfortunately, he said, integrity seems to be a critical aspect of leadership which are mostly found wanting, both in the church, at the workplace and in the society as a whole.

In his keynote address, the IGP, Mr. Oppong-Buanuh, thanked the leadership of The Church of Pentecost for the kind gesture which he said was highly commendable.

He noted that the state is required under Article 200 (3) of the 1992 Constitution to equip the Police Service to maintain law and order. He indicated that the government has indeed supported the police service with substantial equipment and resources to function effectively and professionally.

He, however, said that the constitutional obligation on the state cannot be sustained without support from other stakeholders. “I, therefore, urge all stakeholders to emulate this commendable gesture from The Church of Pentecost and support the Ghana Police Service with the requisite equipment to improve on the service delivery and better serve our country,” he said.

The IGP indicated that crime is gradually becoming more sophisticated and complicated, therefore, the Police need the support of everyone to fight it.

The Regional Minister, Hon. Eric Kwakye Darfour, said security is a shared responsibility and required the support of all individuals and groups to ensure a peaceful nation. He thanked the church for the various social intervention projects it is carrying out in the country to complement the government’s efforts to bring about the much-needed peace, security and development that Ghana is aspiring to attain.

He personally extended his profound appreciation to the Chairman of the church, Apostle Eric Nyamekye, for giving his blessing to the project.

The Regional Minister also exalted the church’s prison intervention project which he noted is a good initiative to decongest the Ghanaian prisons and equip inmates with employable skills.

The Okuapemhemaa, Nana Afua Nketia Obuo, on her part, was full of appreciation to the church for the project.