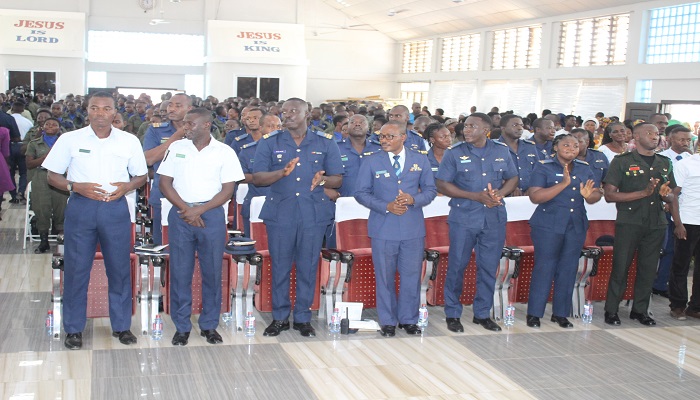 The ceremony which was held on 13th January, 2019 at the Air Force Worship Centre auditorium was under the theme, “Equipped to Serve the Nation and Mankind.”

Speaking at the ceremony, the guest speaker who is the Area Head for Takoradi, Apostle Joseph Kwame Assabil, admonished the officers to serve the nation and humanity with the skills they have acquired.

The Area Head said that, for every individual to perform creditably in his or her field of work, there is the need for the person to be well equipped and well resourced. He added that, every individual needs proper preparation and the right equipment to be able to function professionally and appropriately.

Expounding Ephesians 4:7-15, Apostle Assabil hinted that spiritual gifts are given for the purpose of equipping the saints that they may grow fully into the stature of Christ, emphasising that, “the job of leaders is to equip their subjects and prepare them for the future.”

He added that the goal of the church is also to equip people and prepare them for heaven such that they will become knowledgeable in the word of God to avoid being deceived by charlatans.

He stated that, to be able to be part of the grand vision of God, one needs to avail himself or herself for equipping. Citing 2 Timothy 2:1-4, Apostle Assabil admonished the recruits not to entangle themselves in civilian affairs in order not to miss the objective of their calling.

“You have to obey and submit to your leaders in all things so that God will lift you up in due time,” he said.

The Area Head made an illustration with Philippians 2:25 by explaining that the military service involves hardships, loyalty, humility, self-sacrifice, enthusiasm, and sympathy, which requires one to do away with the mentality of material and luxurious things that can impede their progress.

He stated: “A soldier is not a person in a military uniform; a true soldier is someone with good character and army values of loyalty, personal courage, respect for authority and dignity.”

He urged the recruits to defend the nation at the peril of their lives and also develop a sense of patriotism, saying, “The joy to live is seen in serving humanity and the nation.”

Squadron Leader G. Y. N. K. Bouneudi, speaking on behalf of the Base Commander, advised the recruits to contribute their quota to the nation building.

He explained that the period of training was a period of transformation where they tried to drain the civilian blood from them and inject into them the blood of military and that the actions of their instructors were not to harm them but to transform them.

He admonished the parents of the recruits to be very careful on the kind of expectations they place on their wards as they passed out. He told them not to put undue pressure on the recruits to solve their economic and social problems for them since such expectations would lead them astray.

He used the opportunity to thank The Church of Pentecost for hosting them at both the Induction and Passing Out Services. He also thanked the Bible Society of Ghana for donating Bibles to all the recruits during the induction service.