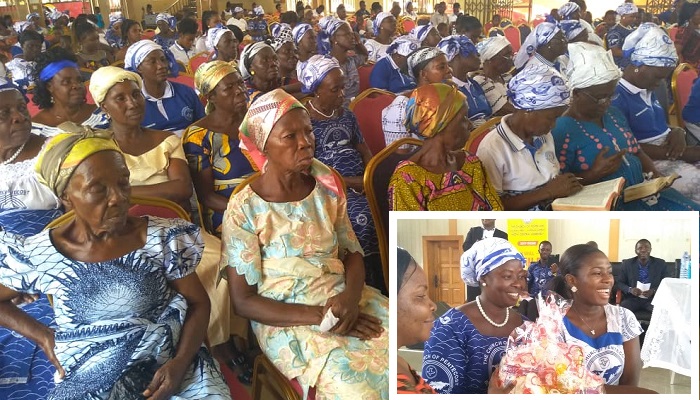 The Ahensan District Women’s Ministry in the Asokwa Area of The Church of Pentecost has organised a special event to honour all mothers in the District.

The event, which took place on May 12, 2019, at the Ahensan Central Assembly church auditorium, was held as part of activities marking this year’s National Women’s Week Celebration.

The purpose of the event, according to Mrs. Abigail Yiadom (Wife of the Ahensan District Minister), was to honour mothers, particularly single mothers, who have successfully raised their children in the fear of God.

She said that, by honouring them, it would inspire other young ladies and prospective mothers in the District to emulate them.

Among the dignitaries for the event were the Queen mother of Ahensan, Nana Fosua II and Deaconess Dr. Araba Yankson, a dentist at the Okomfo Anokye Hospital and a member of PIWC-Asokwa.

Addressing the women, Nana Fosua advised mothers not to renege on their parental responsibilities but to do their best to provide for the needs of their children and raise them in a godly manner.

He said that although they may be financially constrained they should persevere and make the sacrifices required to support the education and aspirations of their children, knowing that their toil would never be in vain.

She also commended the leadership of the Women’s Ministry for organising such a thoughtful programme.

On her part, Dr. Araba educated the participants about dental hygiene and took them through some good dental practices.

To climax the event, all mothers were given a special package by the Women’s Ministry.

Present at the event were the Ahensan District Minister, Pastor Stephen Boakye Yiadom, as well as the Women’s Ministry Leader, Deaconess Beatrice Antwi and her deputy, Deaconess Naomi Dwamena