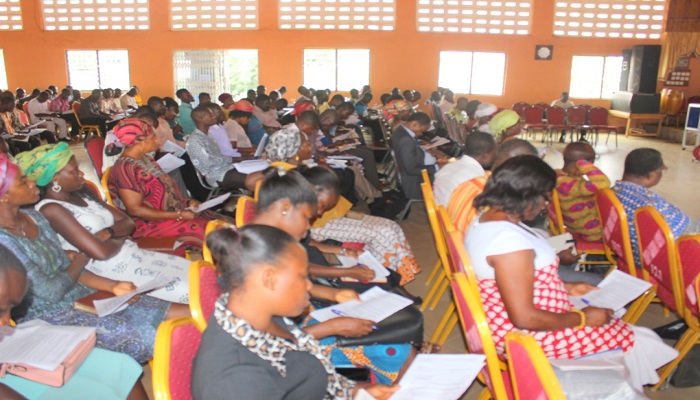 The Agormanya Area of The Church of Pentecost has organized a day’s seminar for all Ministers, Presiding Elders, and Bible Study and Home Cell Leaders in the Area.

The training was held on Saturday, June 8, 2019 at the Agormanya Central building. It was held in collaboration with the National Discipleship and Leadership Development Committee.

Pastor Seth Ofei Badu of the Old Estate District in Koforidua Area, who was the main speaker for the training, spoke on the topic: “Developing Disciple-Making Leaders for the Local Church.”

Reading from Acts 19 and 20, Pastor Ofei Badu used Apostle Paul as a case study, stating that, “when Paul faced rejection from the synagogue in Ephesus, he chose 12 people to make them disciples.”

He added that, the 12 were initially untrained and “unfit” to spread the gospel, but Paul baptized them in the name of the Lord Jesus and taught them for two years. “Therefore, disciple-making leaders must recognize the need for training and developing people,” he said.

Pastor Ofei Badu stressed that disciple-making leaders must carefully select and develop people whose hearts are fertile soil for growing as disciples and who have the desire and zeal to disciple others.

Pastor Ofei Badu further asserted that, the life of disciple-making leaders should be an example to others. “The gospel should not just be preached in words but in deeds,” he revealed.

He added that, to effectively disciple members, the following groups must be equipped to function properly in the church; New Converts class, New Members class, and Home Cell and Bible Study Groups.

The seminar was climaxed with an open forum to give participants the opportunity to ask questions, receive answers and share their thoughts and views on topics discussed.

Participants were admonished to own the vision of the Church and develop a passion for fulfilling their part of the vision.