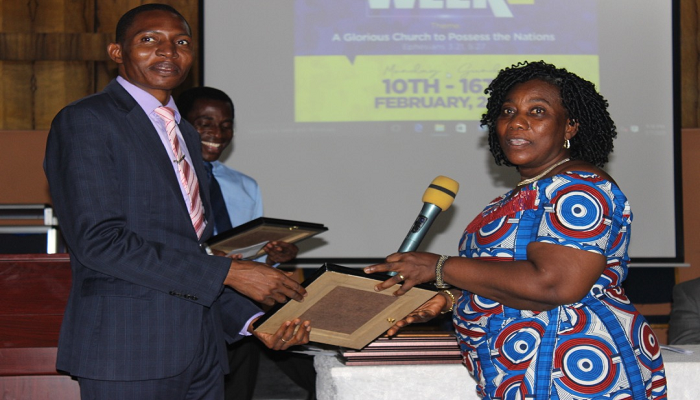 The Agormanya Area of The Church of Pentecost, led by Apostle James Gabriel Quardson, has awarded districts and individuals who performed creditably in the various departments of the church in 2019.

The awards were given to the deserving districts and individuals during the 2019 Area End-of-Year Presbytery meeting held at the Agormanya Central assembly on February 7, 2020.

Akrade, Sekesua, PIWC-Akosombo, Asutsuare, and Apeguso districts were awarded for achieving their budgetary allocations in Missions Offering for 2019. They received certificates and undisclosed amounts of money as their prize.

With regards to the ministries, Miss Ruth Okyere of Akrade District was awarded for emerging as the winner for the Area 2019 Preacher Kids Competition. Bamemba Johnson of Akosombo New Combine and Atter James of Asesewa districts who emerged as the first and second runners up were also awarded for their sterling performances.

In a short exhortation, Pastor Samuel Kwesi Bonney of Agormanya District, entreated believers to reflect the true nature of God (the glory) which has been deposited in them.

Concluding his message, Pastor Bonney explained how believers could consistently reflect the glory of God in their lives, saying, “Constant fellowship with God in prayer, fasting and exercising the gifts of God are inevitable in reflecting the glory of God in our lives.”

Pastor Joseph Kweku Donkor, speaking on behalf of the ministers whose districts took the awards, thanked the Area leadership for the kind gesture and promised to continue to work hard.