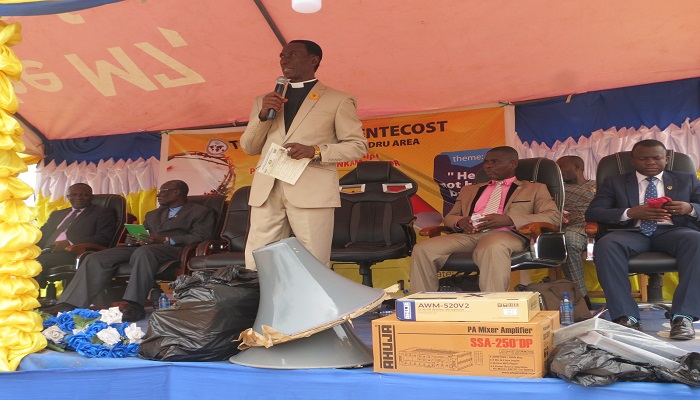 The Agona Swedru Area of The Church of Pentecost, as part of the 2019 Easter celebrations, has organized conventions at five zonal centres in the Area namely, Swedru, Asikuma, Nyakrom, Afransi and Nsaba.

Preaching the sermon on the topic, “The facts and evidence of the resurrection of Jesus Christ” at the Asikuma zone to a little over 1,500 members who gathered at the Methodist School Park in Asikuma, the Area Head, Prophet David Kwasi Kankam Beditor, who is a Member of the Executive Council of the Church, advised believers to be wary of the false theories that have been propounded by some scholars, which can negatively influence their Christian life.

Quoting from Luke 24:1-7, Prophet Kankam enumerated some of the theories which suggested that Jesus Christ collapsed and fainted and never died; another theory claimed that the imagination of the disciples that Jesus will rise again was what they were holding on, with other one saying that it was only the spirit in Jesus that resurrected but not the whole body. Another fraud theory also said one of the disciples rather died but not Jesus Christ because Jesus is currently performing miracles in Libya.

Prophet Beditor asked the congregation to forgive one another because Jesus Himself forgave humanity of their sins even when He was on the cross. He also reminded the members of some of the words Jesus said while on the cross, which represent comfort, loneliness and grieve, as well as words of triumphant and committal.

The Area Head advised Christians to visit their family members and loved ones with gifts during Easter as shown in the Bible by Joseph of Arimathea who offered his grave as a gift to Jesus for His body to be buried in. He said the uniqueness of Christianity is the fact that Jesus is never “late” as compare to other religions that do not believe in Jesus Christ but have their leaders died and never resurrected again.

In conclusion, the Area Head told the congregation that one thing that makes them believe in the resurrection of Jesus is the fact that the tomb in which He was buried is still empty and His ascension into Heaven after He had blessed the disciples.

Some members who work in the government sector in the zone donated a set of instrument for evangelism to the Church. The Area Head commended their effort and initiative and asked others to emulate the gesture.