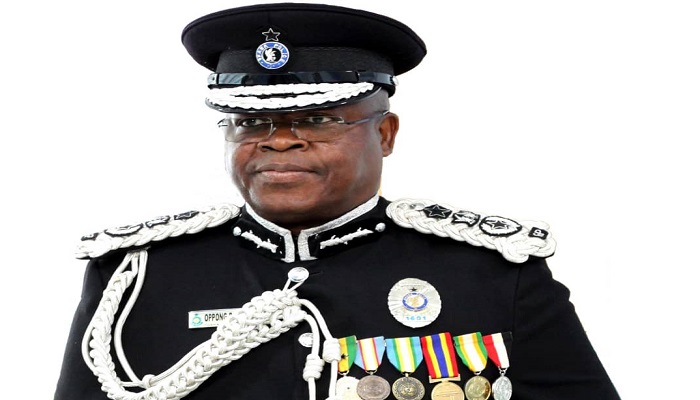 The Acting Inspector-General of Police (IGP), James Oppong-Boanuh, has directed the interdiction of the Lakeside District Commander, DSP Mr Eric Partey Opata for keeping a suspect in police custody for nine days without due process.

In his absence the Adenta Divisional Police Commander, DSP/Mr. Cephas Coffie has been directed to supervise the command until further notice.

This was disclosed in a statement published on the Ghana Police website.

The Director-General of the Police Public Affairs, Assistant Commissioner of Police (ACP) David Senanu Eklu in an interview with the Ghanaian Times revealed that the IGP’s action followed a formal complaint made by the suspect (name withheld) to the police hierarchy for human right abuse.

The Director-General of the Police Public Affairs said DSP Opata was asked to hand over all weapons, uniforms and other police accoutrements, including badge, to be kept in safe custody.

ACP Eklu said the Police Commander’s bungalow was also expected to be searched for any police property he may have in his possession.

ACP Eklu said the Police Commander would be on interdiction for 90 days while investigations and internal discipline was taken per the police regulations.

ACP Eklu said the suspect, who is a businessman, was arrested early this month, for allegedly stealing, but was detained for nine days and has since not been granted police enquiry bail.

The Director-General said the alleged conduct of the police commander was a violation to the suspect’s human rights.

He said per police regulations when a suspect is arrested for any offence he or she should be granted police enquiry bail or properly remanded by the courts in police custody within 48 hours whilst investigations continue.

“Suspects should either be released on bail or sent to court to be properly remanded after his arrest by the police per the police regulations,’’ ACP Eklu said

According to him, keeping suspects beyond the required period was a violation of people’s fundamental human rights and police service regulations.

ACP Eklu urged police personnel, especially Police Commanders to abide by such regulations, to ensure that human rights of victims were not violated.

He called on the public to report any such misconduct by police to the appropriate quarters for immediate action.