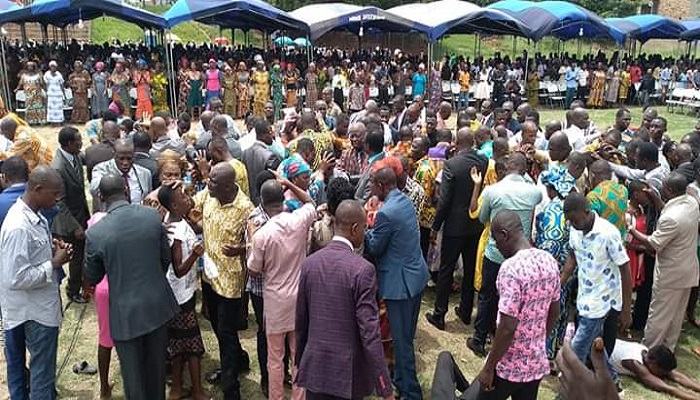 The just-ended Easter convention held in the Accra Newtown Zone in La Area of The Church of Pentecost saw 11 persons surrendering their lives to Christ on the Good Friday.

A total of 42 members also received the baptism of the Holy Spirit on the same day. The convention was held under the theme, “Jesus, the Anointed One was raised from the dead” (Acts 10:38,41).

The speaker for the day was Pastor Moses Kenneth Abakah, the District Minister for Adabraka. He spoke on the topic, “Our salvation is made complete through Christ’s Baptism of suffering” (Luke 12:50, 18:31-34, 22:15).

He emphasised that, Christ had to go through all kinds of unpleasant sufferings just for the redemption of man, saying, “He was beaten, spat on the face and rejected for our sake.”

He advised Christians not to disappoint God, because He paid a heavy price for their salvation.

Pastor Abakah called on believers to reconcile with all persons irrespective of the evil done against them since Christ’s death brought about reconciliation to all men.

He added that, just as Christ went through the baptism of suffering, it is expedient for Christians to also go through this baptism since they are His followers.

He stressed that, every Christian who goes through the baptism of suffering ought to be thankful to God at all time just like Paul and Silas in prison (Acts 16).

He also stated the need for Christians to constantly go before God in prayer and obtain grace and mercy to stand every form of suffering they may be going through. He emphasised that, the seal of salvation resulted from the baptism of suffering of Christ.

In attendance were the Area Head, Apostle John Osei Amaniampong and his wife. Also present were the pastorate and their wives in the zone as well as the wife of the Chairman of the Church, Mrs. Mary Nyamekye.