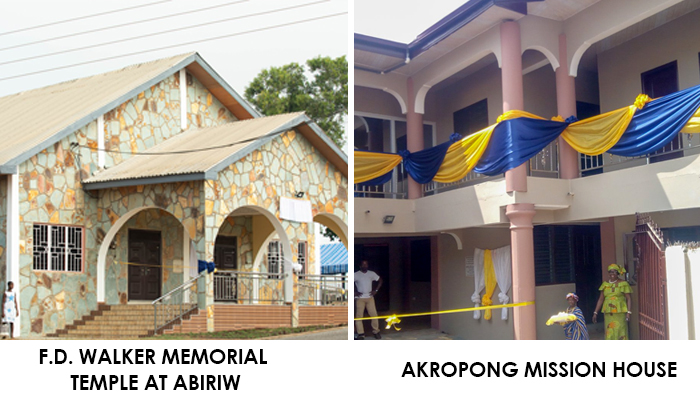 The Fred Diabene Walker Memorial Temple at Abiriw and the Akropong District Mission House in the Koforidua Area of The Church of Pentecost have been dedicated to the glory of God.

The church building was dedicated by the General Secretary, Apostle Alexander Nana Yaw Kumi-Larbi, at the cost of GH¢366,397.34. He was assisted by the Koforidua Area Head, Apostle Samuel Osei Asante and the Akropong District Minister, Pastor B. K. Ahorsu.

The Abiriw local assembly was established in June 1982 during a three-day rally organized by the then District Minister, Pastor Rigwell Ato Addison (now Apostle retired) in the community.

The sod-cutting ceremony to construct the building was performed by Pastor Fred Tettey Obuobi (now retired), the then District Minister, in 1994.

The construction of the magnificent church building has spanned over a period of 25 years. The 400-seater capacity auditorium has an office, six washrooms, balcony for children service, a storeroom and a spacious car park.

The Akropong District was created in 1952. The district seat was first at Larteh. It was later moved to Adukrom and finally to Akropong.

On 5th March, 2006, Pastor C. S Obeng performed a sod-cutting ceremony for the official takeoff of the extended mission house project after Pastor Asare Bediako had conceived the idea of building modern mission house which was partly made of cement blocks and sandcrete blocks.

Speaking at the dedication service at Abiriw on the topic, “Biblical characteristics of a true Church,” with Matthew 16:13-20 as his anchor scripture, Apostle S. O. Asante highlighted three key points namely, the foundation of the Church, the establishment of the Church and the Nature or Character of the Church.

According to him, the Church of God is not about the building, but the people in the building in whom the Holy Spirit abides.

“Since we are the Church, we carry the presence of God,” he said, explaining that the Church stands for both the individual and the congregation.

He indicated that faith is one important thing in making a Church (Hebrews 11:6). He said without faith, one cannot please God and faith in God is only through his Word. He, therefore, encouraged the congregation to have faith in God. “As a Church, we should not allow ourselves to be easily discouraged because of negative circumstances; we should hold on to our faith,” he said.

Apostle Asante pointed out that access to the kingdom of God is through the Church (John 1:11-13).

He added that unity of the Church is another important aspect in growing the Church of God (I Corinthians 1:4-7; 11-12). He explained that a divided church can never be a glorious church. He advised the members not to allow partisan politics and cultural diversities to divide the Church, saying, “We should respect every cultural value.”

He concluded by saying that the Church should be a serving Church by helping one another (Social Care of the Church). This should be done by all and not the leaders of the Church only, he advised.