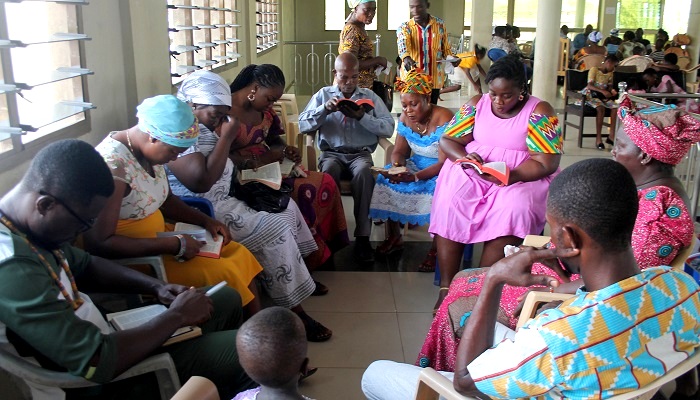 A-Lang Worship Centre in the Odorkor Area of The Church of Pentecost on February 24, 2019, dedicated the entire Sunday Service to the extensive study of the Holy Bible.

The event, which was the first of its kind to be held under the Resident Minister, Pastor Francis Broni, was held to encourage the study and understanding of the Holy Scriptures among members.

In line with the Vision 2023, right after the Worship session, the members of the church dispersed into their respective Bible Study/Discipleship groups for the commencement of the exercise.

On the eve of the day of the Sunday service, Pastor Francis Broni took the various Bible Study and Home Cell Leaders through the Bible Study Manual to ensure effective teaching and learning process.

The exercise was well organised and members were seen to be actively involved in the session as they were taken through Weeks 7 and 8 topics in the Bible Study manual: “Understanding the Concept of the Church” and “The Understanding of the Church as an Organisation” respectively.

During the session, the members learnt that Peter was not the rock on which the Lord was going to build His Church, rather the rock upon which He would build His Church is the divine revelation made by Peter that “Jesus Christ is the Messiah, the Son of the Living God” (Matthew 16:13-19).

They also learnt that the Church of God is not the building, rather the assembly of believers in the church auditorium and that even though having one’s name in the church’s register is important for administrative purposes, what makes one a part of Jesus’ church is accepting Him as Lord and personal Saviour and living by the principles and values He taught and lived by.

During the discussions, it was also established that Christ is the head of the church, and with Him as the centre of the Church, it will always triumph over challenges and obstacles that may confront it.

They also learnt that the church is both an organisation and a community of believers that must have a positive expression of its faith to the world. In addition, the administrative structures of The Church of Pentecost are expressed at the area, district and local levels as well as through the five ministries of the Church; Evangelism, Women, Men, Youth and Children.

At the end of the exercise, the opportunity was given to members to recount what they have learnt during the session. Responses received during this session indicated that the session was very effective and fruitful.