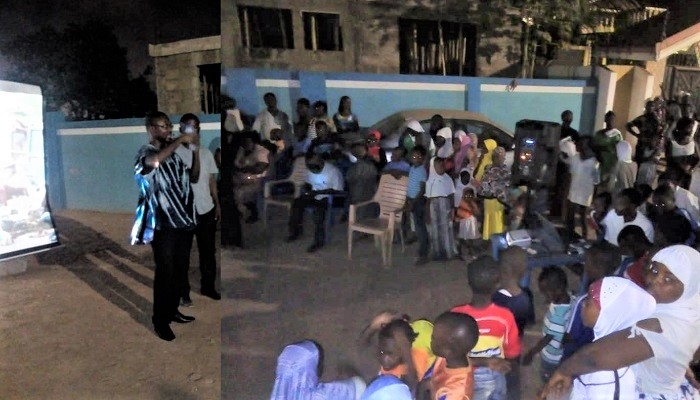 A-Lang Worship Centre in the Odorkor Area of The Church of Pentecost has organised a durbar and video outreach for the A-Lang Community as part of efforts to promote sanitation in the area.

The event, which was held at the premises of the local Mosque on Wednesday, February 26, 2020, was part of activities scheduled for the weeklong campaign.

Speaking at the durbar, the Resident Minister of A-Lang Worship Centre, Pastor Isaac Ayisi-Kumi, took the opportunity to educate the gathering on the need to keep the environment clean. He said that many diseases could be eliminated from the community if residents resolved to maintain a clean environment.

He also informed them about some of the key decisions that were taken during the stakeholders’ meeting held on Tuesday, February 18, involving the church, representatives of the Muslim Community and the Assembly Unit Committee.

“All stakeholders have now agreed that anyone caught littering about would be fined. The Committee is very serious about this, because these fines would go a long way in providing funds for the Assembly,” he said.

He added that the Town Guards at the District Assembly will be paying regular unannounced visits to their homes to inspect their environment.

The Resident Minister’s speech was interspersed with videos on poor sanitary practices and its effects on the environment and the citizenry.

The audience were also shown a news report by Adom TV on Assin Kushea, a town in the Central Region which is said to be the neatest town in Ghana.

Pastor Ayisi-Kumi urged the residents to emulate the people of Kushea by adhering to the new rules that have been introduced in order to make the A-Lang community clean.

The event ended with a clarion call on all and sundry to turn up in their numbers for the upcoming community cleanup exercise on Saturday, February 29, to climax the week-long exercise.