A Baby After 14 Years Of Marriage

Home - News - A Baby After 14 Years Of Marriage 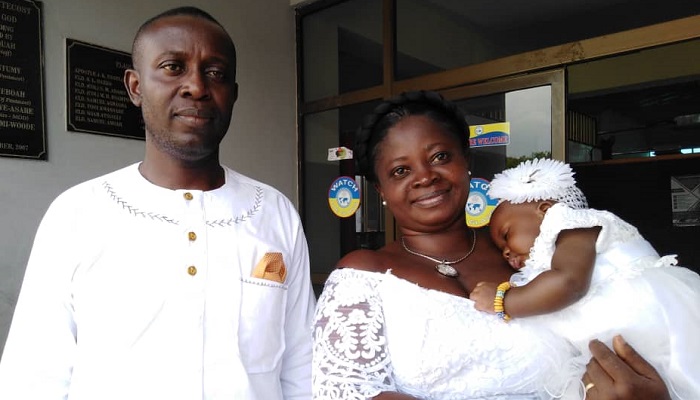 A Baby After 14 Years Of Marriage

Warrant Officer (WO) II Ernest Boahen and his wife, Jennifer Boahen, both of Burma Camp Worship Centre of The Church of Pentecost, have been blessed with a child after 14 years of marriage.

The Boahens have gone all lengths seeking both medical and spiritual help to conceive but to no avail until this year when the Lord visited them. WO II Boahen is 19 years in the Ghana Armed Forces, attached to the Directorate of Engineering Services at the Army Headquarters in Burma Camp Accra. He married at the age of 25 years.

Being the only son of his father, he was seen as the only one to carry on his family’s lineage.

In spite of the challenges from both within and without, WO II Boahen said that before his father died, he cautioned him not to ever leave his wife or do anything unacceptable but rather pray and trust God for a child. According to him, although it has not been easy, the waiting has paid off. He advised those in similar situations not to give up, but rather trust and pray to God for a miracle.

Mrs Jennifer Boahen recounted how she became a laughing stock in the barracks to the extent that some suggested she stops working as the money she was making was of no use because she had no child.

The couple settled on the name Ayeyi (Praise) as a way of thanking God for His divine visitation.