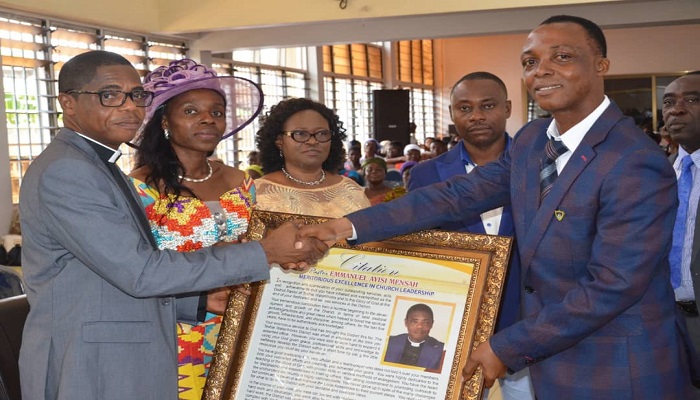 The outgoing District Minister of Teshie Water Works District, Pastor Emmanuel Ayisi Mensah, has been applauded for working hard to transform the district within a short period.

Having spent five years in the district, Pastor Ayisi Mensah and his wife Ruby have been transferred to Somanya District in the Agormanya Area.

Various testimonies given in their honour at their farewell service held at the Emmanuel Parker Memorial Temple at Teshie on Sunday, August 11, 2019, alluded to the fact that the outgoing minister who is the first minister of the district, has fulfilled the mission upon which he was sent to the district.

The district presbytery described him as a man full of the word of God, who taught sound biblical doctrines and preached the word of God with dexterity.

Pastor Emmanuel Ayisi Mensah had also served as a District Minister for the Otumi District in the Asamankese Area and a Resident Minister of Pentecost International Worship Centre (PIWC), Sunyani.

Preaching the sermon at the service on the theme, “Recognise The Man God Sent,” based on 2 Chronicles 20:20 and John 1:16, Pastor Osei Kwame Asamoah-Omono of Teshie District prayed that the eyes of Ghanaians would be opened to know the real servants of God who can lead them to heaven since there are so many fake pastors parading themselves as men and women of God.

Pastor Omono-Asamoah testified that he had worked closely with Pastor Ayisi Mensah on a national assignment for ten years and knows him to be a true man of God, saying, “You dare not mess with such men of God.”

He disclosed that people who are sent by God know God personally, hear His voice, speak to God in private, proclaim the mysteries of God to the church, know the ways of God and have vision. He added that those who listen to the true servants of God receive the blessings of God.

Pastor Omono-Asamoah was hopeful that God will use His sent servants to build a super church and that The Church of Pentecost will continue to train people sent by God and unleash them into society to harvest souls for Christ.

Citing Moses and John the Baptist, Pastor Omono-Asamoah said though they were sent by God and used to fulfil His mission on earth, they all had their own weaknesses. He indicated that every man sent by God has a weakness. He, therefore, advised the church not to dwell much on the weaknesses of God’s sent ones since they are humans, but rather focus on their strengths and anointing and tap from it.

Present to grace the occasion was the Director of the Women’s Ministry of The Church of Pentecost, Deaconess Grace Lucy Yeboah-Asuama. The service was also attended by ministers of the Church in the Area, members, friends and relations from far and near.