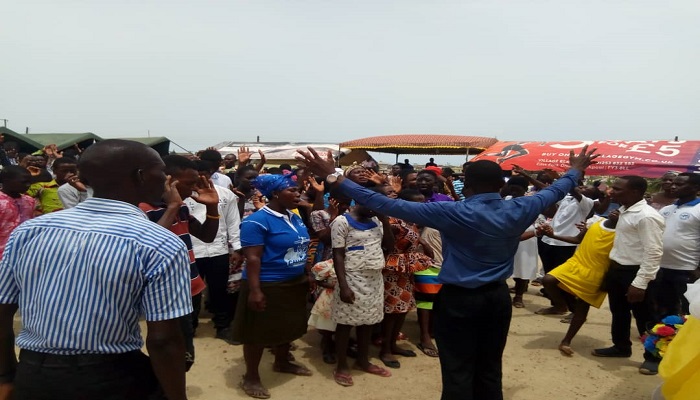 A total of 75 members in the Shama Zone in the Sekondi Area of The Church of Pentecost received the baptism of the Holy Spirit while others were imparted with the gifts of the Holy Spirit on Good Friday morning of this year’s Easter Convention held at the Assorko Essaman Community Park.

This was after the Area Head, Apostle Daniel Kojo Sey, had given the sermon followed by an intensive prayer session led by himself and his wife Rebecca.

The Shama zone is made up of four districts namely, Shama, Assorko Essaman, Inchaban and Aboadze.

Apostle Sey spoke on the topic, “God Anointed Jesus of Nazareth,” taken from Acts 10:38. He explained that Christians are agents of transformation through the power of the Holy Spirit, and that anyone who believes in Jesus Christ has been anointed by God for good works.

He also said that the birth of Christ was by the work of the Holy Spirit, thus when the Angel visited Mary, he informed her that the Spirit of the Lord will overshadowed her and she will conceived and give birth to Jesus.

Quoting John 1:32, which gives an account of the baptism of Jesus, he said two significant events happened after the baptism. Firstly, a dove descended on Jesus, which shows the indwelling of the Holy Spirit. Secondly, an audible voice from heaven spoke, which shows the approval of God that Jesus is the son of God and also presenting Jesus for ministry.

He advised the members not to go after so-called prophets who will deceive them and lead them into doom. He urged them to rather depend solely on God and His anointed. “We can not possess the nation without anointing, and with the anointing of God we can bring revival at every place with find ourselves including our local assemblies,” he stressed.