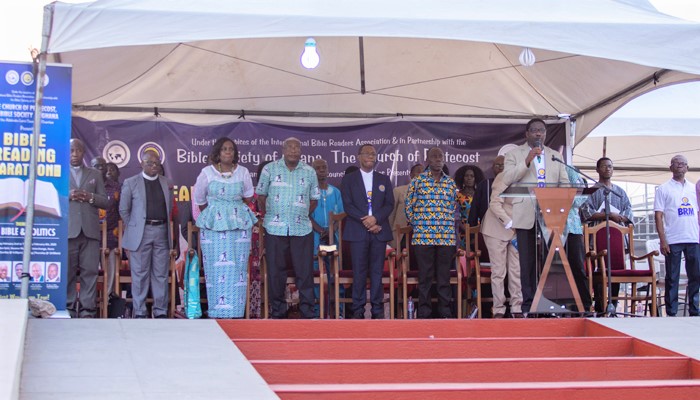 The Church of Pentecost has taken up the challenge of reading through the entire Bible from Genesis to Revelations continuously for the next 96 hours as part of the church’s Bible Awareness Week observance.

The event, dubbed the “3rd Bible Reading Marathon,” is being jointly organized by the Pentecost Men’s Ministry (PEMEM) in collaboration with the Bible Society of Ghana and the Adabraka Local Council of Churches.

The marathon officially took off on Sunday, February 3, 2020, at a grand ceremony organized at the Freedom and Justice Park (formerly Obra Spot) near the Kwame Nkrumah Interchange. The marathon opened with the reading of the first chapter of Genesis by the General Secretary, Apostle Alexander Nana Yaw Kumi-Larbi; the subsequent chapters were read by other dignitaries present at the event.

Delivering the keynote address at the event on behalf the Chairman, Apostle Kumi-Larbi said that the vision of the public reading exercise is to encourage a greater number of committed Christians in the metropolis to read the scriptures.

He added that the goal of the Bible Reading Marathon is to follow the words of Paul the Apostle who encouraged the believers in 1Timothy 4:13 to devote themselves to the public reading of scripture.

“The word of God is powerful, and the reading of scriptures in strategic public places is a form of prayerful declaration that Ghana, and for that matter, the people of Accra, will find their destiny in Christ the Living Word,” he noted.

Apostle Kumi-Larbi said that the theme for the Bible Awareness Week, which is also the theme for the event, “The Bible and Politics,” was strategically chosen to reflect the political season as the country prepares to go to the polls in December. According to him, the week would also be used to educate and encourage members of the church, in particular, and Christians, in general, on the need for them to be actively involved in the governance of the nation.

The PEMEM Director, Apostle Emmanuel Ankra-Badu, on his part, said that, unlike two editions, the public Bible reading exercise is being replicated at the various levels of the church.

He also revealed that individuals, churches, church groups, youth groups and schools, among others, who wish to participate in the 92-hour continuous exercise could walk into the event premises to sign up to read a scripture.

The opening event had in attendance some ministers of the church, senior officials of the Bible Society of Ghana, and other renowned persons within the Christian circles.