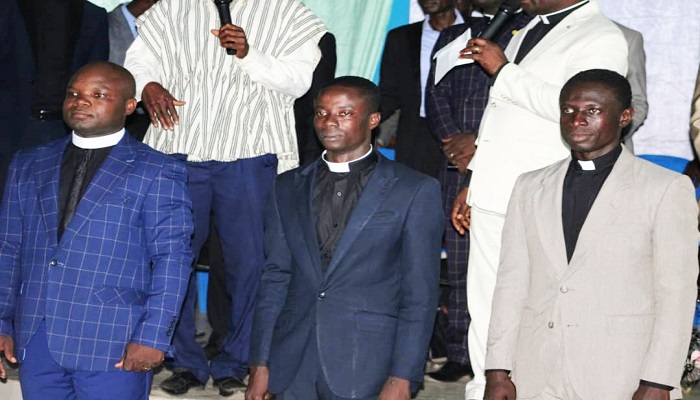 The ordination service which took place at the Nakpanduri Central Assembly on May 14, 2019, was officiated by Apostle Emmanuel Ofei Ankra-Badu (Director of the Pentecost Men’s Ministry), assisted by Apostle Francis Yaw Adu (Walewale Area Head).

Preaching the sermon on the topic, “Responding To Divine Call” with scripture from Isaiah 6:1-8, Apostle Ankra-Badu announced that God has a message and that He is looking for messengers to send them into the world.

He said Isaiah, whose name means ‘Salvation comes from the Lord,’ saw an opportunity in the general call that was made and availed himself to be sent by God.

The PEMEM Director encouraged Christians to always seek to see God instead of the challenges they face in times of difficulties.

He also admonished ministers to see transfer as a divine call to execute a special task that God wants them to do. “So you must ask God what you can do and make good use of that opportunity since you do not have all the time,” he added.

He opined that, God does not work with competency but availability. Using David and Goliath as example, he said that God used ‘available David’ to kill ‘competent Goliath.’ “Human will use appearance and competence to disqualify or discourage you, but be sure in the Lord and avail yourself,” he stressed.

He advised ministers who have responded to the divine call not to make money their motivation, and should not think about getting nice houses, vehicles and huge salaries but work diligently to please God who has called and sent them.

Apostle Francis Yaw Adu commended ministers and members of the Area for working very hard to take the first position in the national performance analysis of The Church of Pentecost for 2018. He charged them to defend the gains.