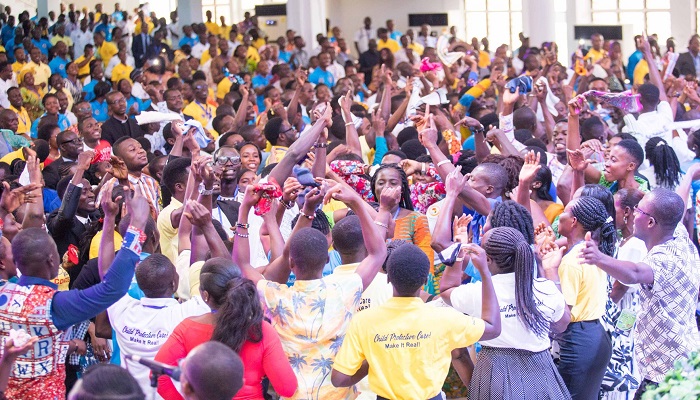 The much-anticipated Pan African Conference for Children’s Ministers was officially opened on Thursday, July 25, 2019, at the Pentecost Convention Centre (PCC), Gomoa Fetteh, near Kasoa in the Central Region.

The event, which is being organised by the Children’s Ministry Directorate of The Church of Pentecost in collaboration with Petra Institute, South Africa, is under the theme: “Protective Care Of The Child; Our Mandate To Possess The Nations,” with the slogan, “Protective Child; Make It Real!”

The Conference, which is the second of its kind to be organised, has been well patronized by members of The Church of Pentecost, other Churches in Ghana and some para-church organizations. The conference has also received delegates from Chad, Uganda, Cote d’Ivoire, South Africa, Ireland, France, Sweden, among others.

Delivering his welcome address, the Director of the Children’s Ministry, Apostle Fred Tiakor, stated that a consensus was reached for such forums to be organised frequently after the organised of the maiden Pan African Conference three years ago.

He was hopeful that through conference participants would be well equipped to deliver poor and unfortunate children in Africa from deprivation, molestation, abuses of all forms, torture, rape and child labour, among others.

Speaking on the topic: “Managing God’s World With God’s Resources For Accountability” during the opening session of the event, the Chairman of The Church of Pentecost, Apostle Eric Nyamekye said that God has entrusted to all His creations into the care of human beings (Genesis 1:26-28). Thus, every human being, both believers and unbelievers, have been given the responsibility of managing all that He has created.

He added that, in order to discharge this duty effectively, Apostle Nyamekye also mentioned that God has therefore deposited gifts and talents in every human being to serve this purpose. This, he explained, is the reason why the abilities of human beings differ from person to person.

Referring to the Parable of the Talents in Matthew 25, the Chairman said that God, in His wisdom, has deposited gifts and talents in every individual according to each person’s ability.

“This was why the men who were fruitful with their talents, received equal commendation even though the talents they were given were not the same. This also meant that, if the man who was given one talent had worked with his and been productive, he would have received the same commendation, because it was given to him according to his ability,” he said.

He pointed out that although the talents and gifts given to each individual may differ, success or riches are available to all.

He, however, noted that what makes an individual stand tall among their peers is how well they develop what God has deposited in them for productive use.

“The extra things we do, makes us extraordinary, aside from that we are all ordinary,” he said.

Apostle Eric Nyamekye indicated that just like every human being, Christians also have the mandate to take care of God’s creation. However, when they become born again, they receive an additional mandate of seeing to the advancement of the Kingdom of God and God grants them grace and spiritual gifts to be able to excel in the added mandate.

“A Christian, therefore, has a dual responsibility. That is, a responsibility towards creation and to advance the Kingdom of God on earth. In view of this, Christians must be able to do more or be more fruitful than unbelievers,” he noted.

He stated that God has placed these graces and gifts and talents in Christians so that they would be fruitful (John 15). Hence, they must always bear in mind that they would be held accountable for how productive they were with what they were given as seen in the Parable of Talents.

He, therefore, challenged the Child Workers to appreciate the special ministry they have received to nurture children and to do the best to serve faithfully (2 Corinthians 5:10). He advised them to always be mindful of the fact they would give an account of their stewardship when the Master returns.

He also appealed church members who have undergone professional training in teaching to avail themselves to support the Children’s Ministry with the teaching skills they have acquired to effectively nurture child members in the Lord.

“Everything we possess is the Lord’s, including our lives, so our talents and gifts are the Lord’s. Let us work well with them and be productive because one day we will give an account on what we did with them while we were here on earth,” he said.